Since I didn't have to work this weekend, I convinced Mr. Johnson that he would love to spend hours in a car on a drive up to the Sax-Zim Bog for a winter birding adventure. Stoked up on coffee & some delicious Perkins muffins, we headed out early Saturday morning for the 255 mile trip. I knew it was going to be a good birding day when three Pileated Woodpeckers flew over us on our first pit stop north of the Twin Cities. Even with unexpected snow, slippery highways and plenty of overturned vehicles in the ditch, we continued northward on our quest to see awesome birds. And we weren't disappointed!

Here's a pictorial review of our incredible birding mini vacation. This review will start and end with what were birding highlights for me, and all the good things in between.

We were heading out Admiral Road and McDavitt Road to finish up our drive through the Sax-Zim Bog birding area. Up ahead on McDavitt Road, we spotted some parked cars and people out with cameras and tripods. Thinking this might have been the Black-Backed Woodpecker reported earlier in the week, we stopped so I could get a chance to see it too. I wasn't the least bit disappointed to see a Great Gray Owl instead of a Black-Backed Woodpecker! 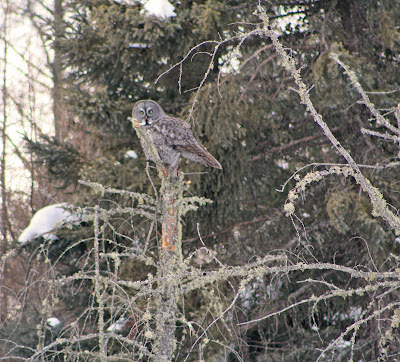 After only a minute or so, this beautiful owl decided to fly over to another dead evergreen snag nearby, and I was there to capture the short flight! 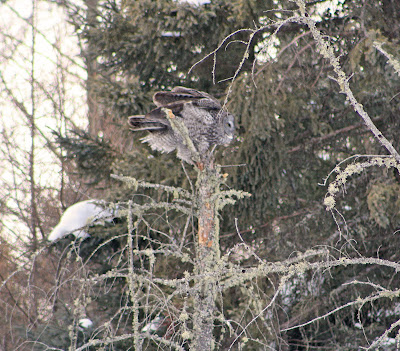 Wow! (I'm sure I had the dopiest smile on my face while I was taking these pictures!) 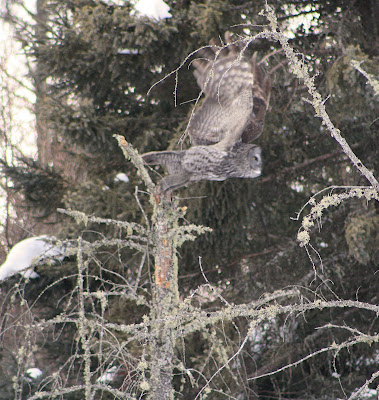 The owl spent quite a bit of time looking at the ground. I'm sure it was trying to locate something tasty to eat. 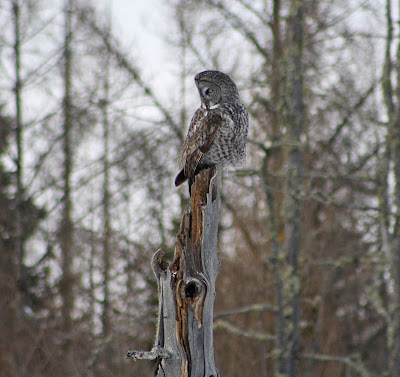 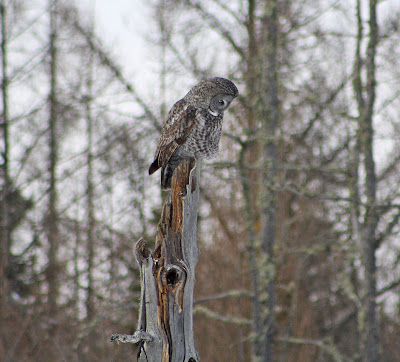 Good-bye beautiful owl! Thanks for making my day so special! 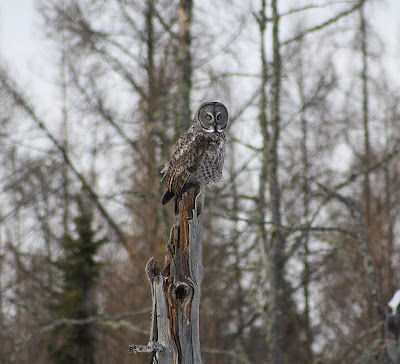 I saw my FOY Red-Breasted Nuthatch (they haven't visited my birdfeeders in SE Minnesota this winter). 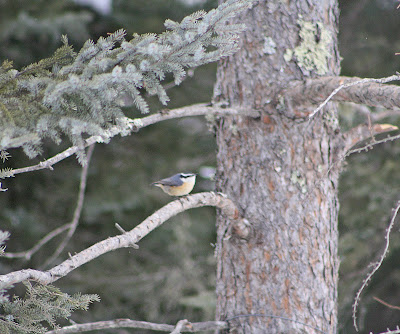 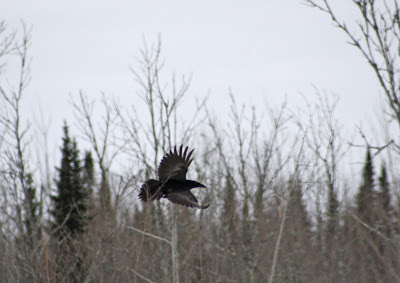 Along Admiral Road and McDavitt Road, some folks have set up a couple of bird feeding stations. These are good places to stop and see lots of birds taking advantage of the unexpected bounty. Black-Capped Chickadees were the most plentiful birdies at these feeding stations. It was not unusual to see at least 8 at a time! I also got a great look at a Boreal Chickadee, but it flew away before I even had the camera turned on. 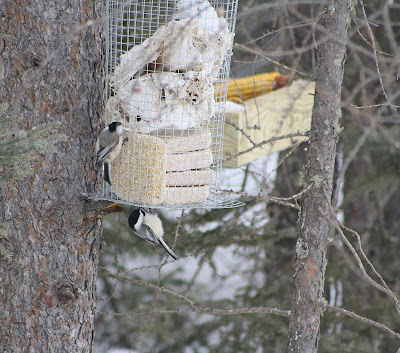 Through the windshield I snapped this really awful photo of a pair of grouse. We ran into some Rochester birding friends (who were also having a mini vacation at Sax-Zim) and they said these looked like Sharp-Tailed Grouse. 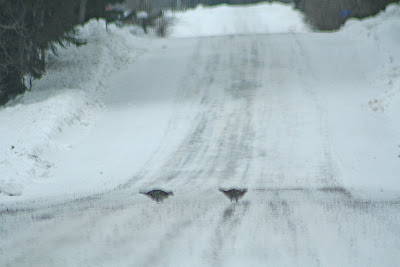 Sophie got to ride along with us for the trip. There were a couple of places where we were able to let her out of the car to just run around. 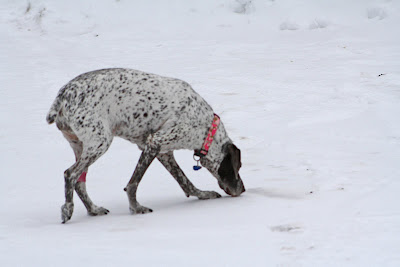 Even though she's an elderly doggeh now, she still thoroughly enjoys trips in the car and finding new scents wherever she happens to be (no matter how deep the snow is!) 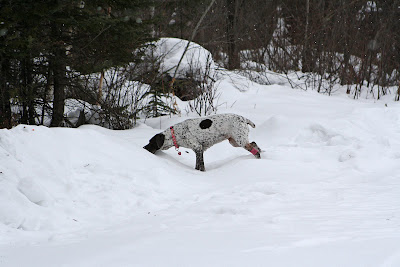 Do you like Northern Shrikes? We saw a total of three of them during our drive through the Sax-Zim Bog birding area. 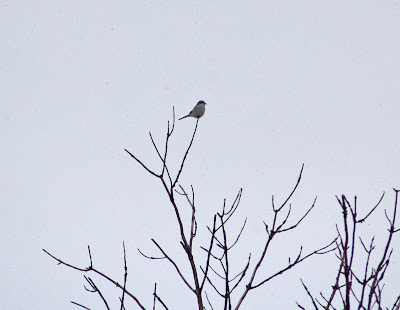 We do have them in SE Minnesota, but again, not commonly seen at any time of year. 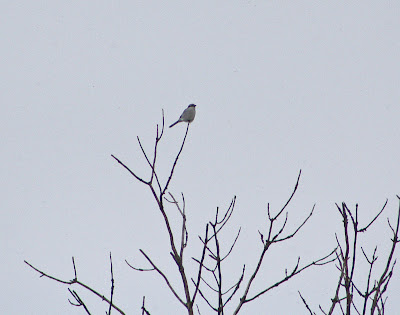 Here are a couple of Pine Grosbeaks and a Common Redpoll at the top of an evergreen. 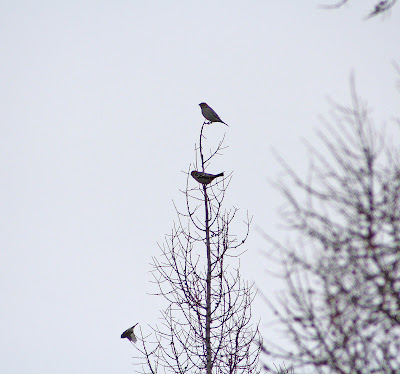 Very pretty birds! Want to see them closer? Here's the Common Redpoll. This is a male. During an irruption year, I have seen them dining on thistle seed at my birdfeeders, but none so far this year. 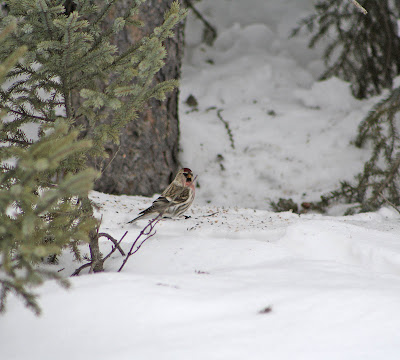 Here's are 2 female Pine Grosbeaks at one of the feeding stations on Admiral Road. 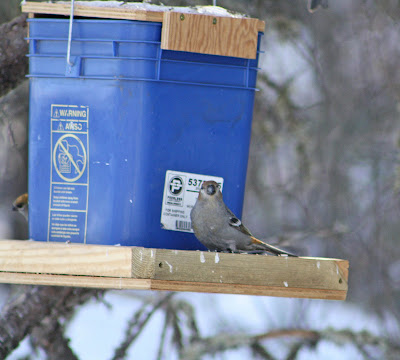 (See her peeking out from behind the bucket on the left side of the photo? I didn't even notice her until I was editing this photo!)

Here's another beautiful female perched on a branch. 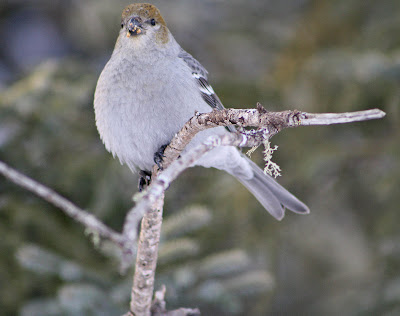 Here's a male Pine Grosbeak perched on a branch above me. They're actually a pretty large bird at 9" -- about the same size as a Northern Cardinal -- so they're really easy to spot. 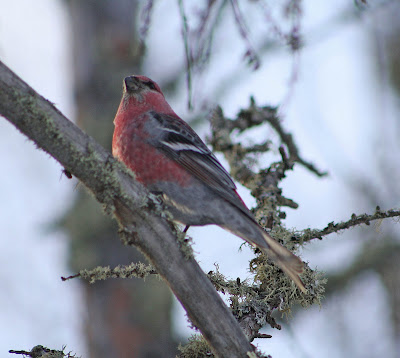 While I was watching the Pine Grosbeaks, I also noticed a large bird sitting in the top of a tree just up the road. It definitely wasn't an eagle, crow, or raven, but I couldn't tell for sure what it was except that it was a raptor of some sort (judging by the head and beak size/shape). 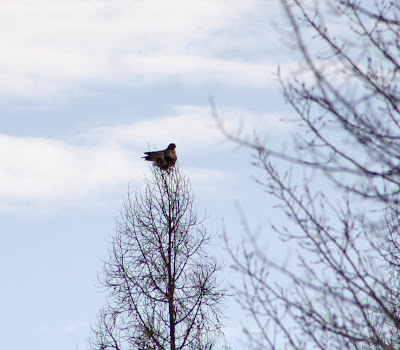 After walking a little bit closer, this bird decided it had had enough of my scrutiny and decided to fly away. Fortunately, I had my camera ready and was lucky enough to get this shot which confirmed its identity -- Rough-Legged Hawk. 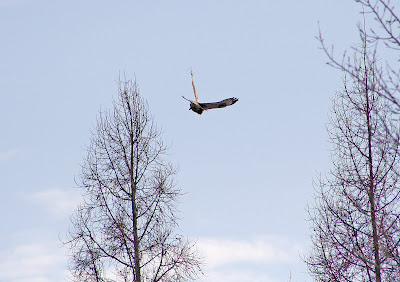 We never saw the Evening Grosbeak, Northern Hawk Owl, or Gray Jays, but I was really happy with all the birds we had seen during our visit. However, the most exciting sight of the day for me took place just a short distance from our turning on to the main road and heading for home. Even though this is a really poor picture, can you tell that it's a Black-Billed Magpie? 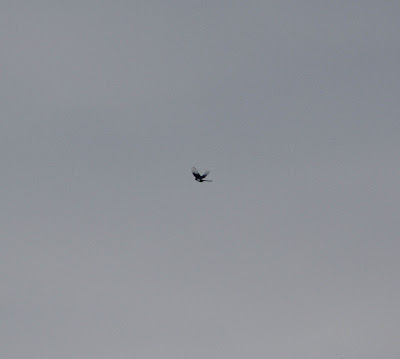 This bird was perched in a tree near the road, but as soon as we stopped the car it flew away. I started snapping pictures hoping that at least one of them would turn out, and this picture turned out the best (of the other worse ones!) I've only seen Magpies once before in Minnesota and it's been at least 20 years. I loves me some Corvids!

As we were departing the Sax-Zim Bog birding area, the skies started to clear and we enjoyed what turned out to be a beautiful sunset heralding the end of a lovely birding day in Northern Minnesota. 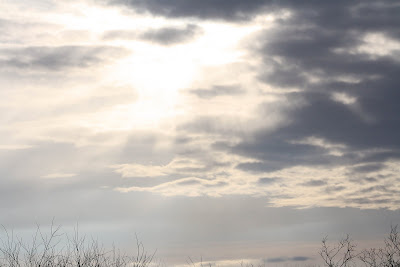 For any of you who have thought about attending the Sax-Zim Bog Winter Birding Festival, I urge you to strongly consider this festival for next February. I'll see you there!


Oh yeah, one more thing......I made good progress on this new shawl I started and knitted on during the 500+ miles spent riding in the car yesterday! 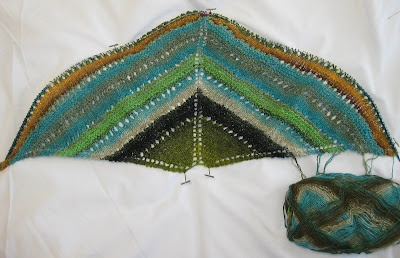 Labels: bird obsession, birds, fun stuff, livin' in Minnesota, owls, pets, raptor, Sax-Zim Bog
Newer Posts Older Posts Home
Subscribe to: Posts (Atom)
All images and text are property of RuthieJ and the 'Nature Knitter Blog' and may not be used without permission.