I was sitting at the dining room table this afternoon working on a lace patterned knitting project that requires lots of natural light.  With 4 inches of new snow last nite, it's been a busy day at the birdfeeders right outside my window.  Without any advance warning from the bluejays, a Cooper's hawk flew in to try and catch some dinner.  It landed in the big oak tree right near all the birdfeeders.   Woodpeckers had no warning and had to "freeze" wherever they were until Cooper's finally flew away hungry again..... 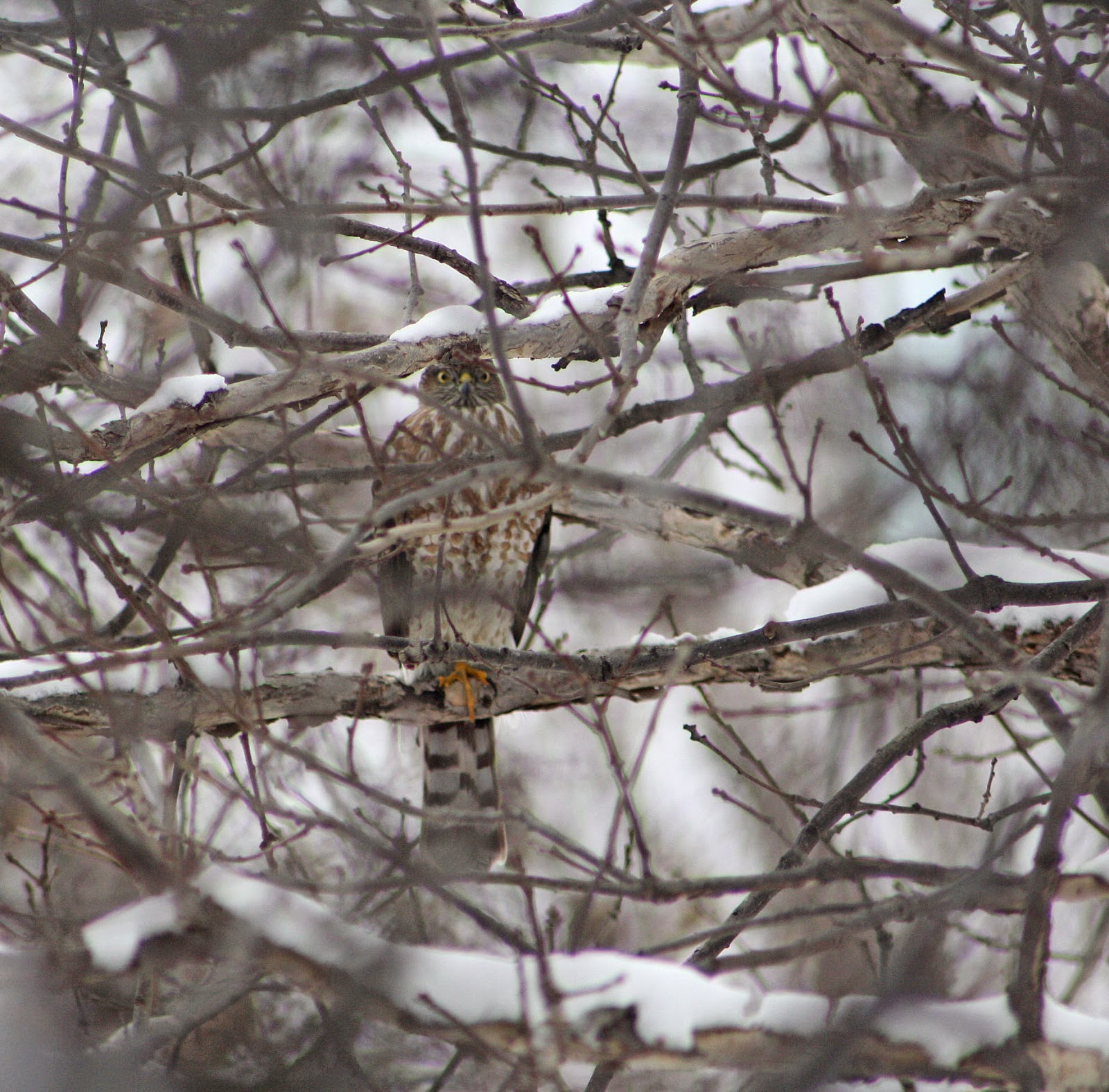 This is a first year Cooper's Hawk -- you can tell that by its yellow eyes.  (Adults have dark rusty-red colored eyes).  It's cold out there, so the Coop kept one foot tucked up into its tummy feathers for warmth. 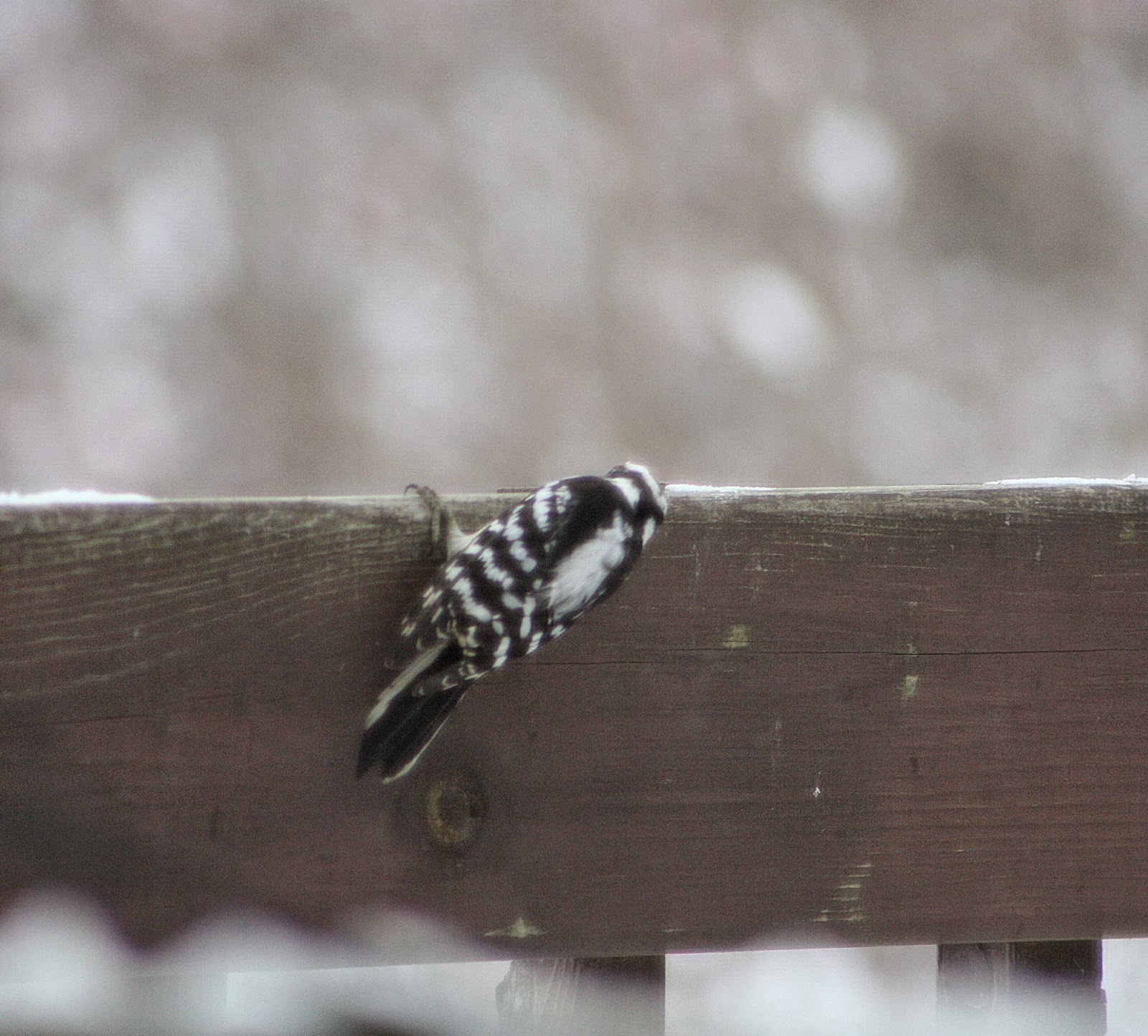 Poor little Downy Woodpecker didn't even have time to fly away and was just barely able to duck down behind the deck railing and hang on by two toes, hoping desperately that the hawk wouldn't be able to spot her. 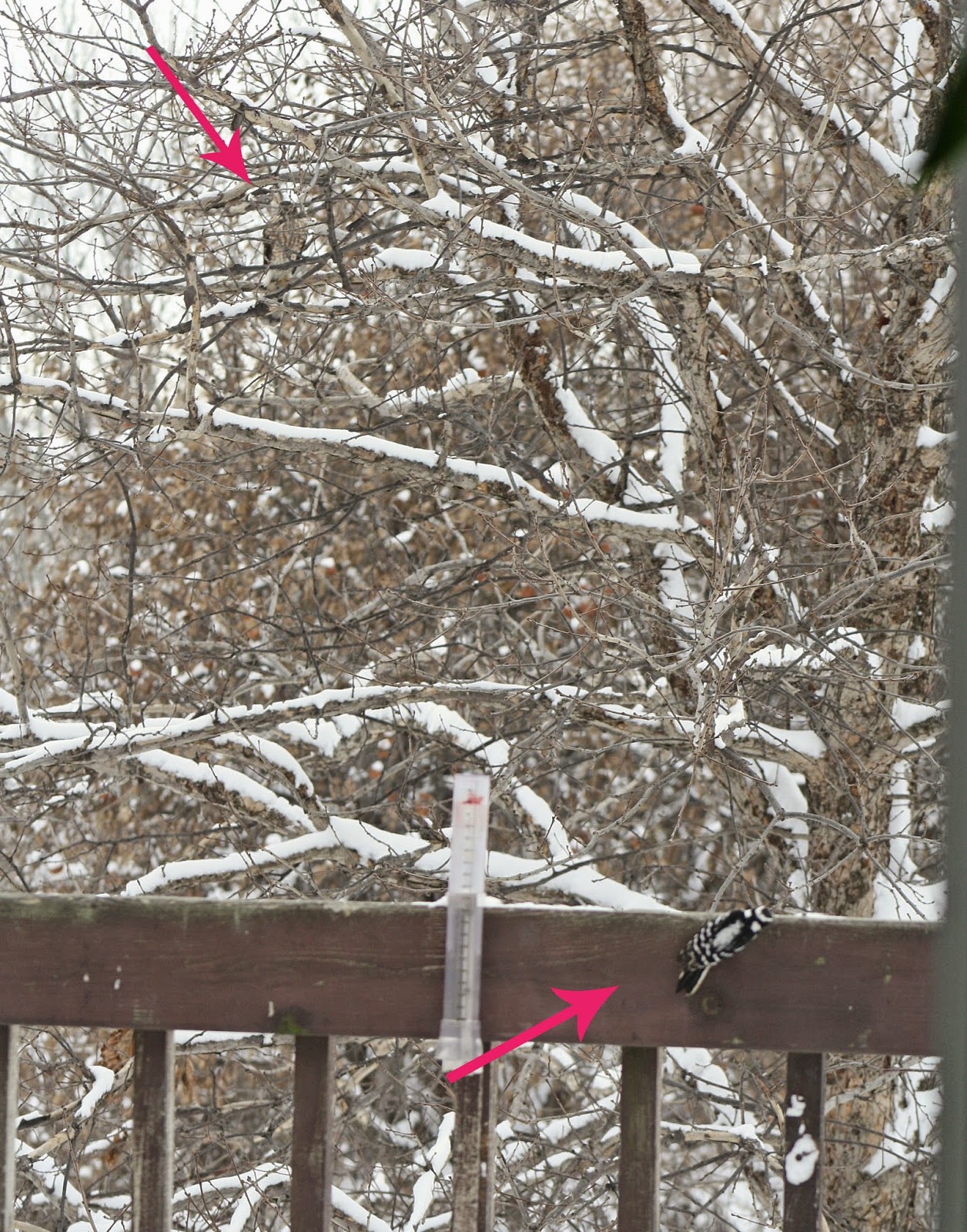 Here's where the Cooper's hawk was perched in the tree in perspective to the Downy woodpecker on the deck railing.  Distance is approx. 10 yds.  The majority of my birdseed and suet feeders are concentrated in the area outside my dining room windows (for best photo ops!) and there are at least a dozen feeders on the deck and hanging in trees all around this big tree where the Cooper's hawk is perched.

I believe there are a nesting pair of Cooper's Hawks in our neighborhood.  I feel privileged to be able to see these birds up close.  The ratio of Coop's to songbirds is probably 1:200 in my backyard, so if they need to hunt here, that's fine by me.  I see the hawks fly into the backyard several times a day (if I'm home to watch them), but I believe the majority of times they fly away without ever catching anything.

I got a gentle "scolding" from a friend recently who's been missing my blog posts. So I decided I'd get one more in before the end of 2014. Working two and three jobs for the last few years has pretty much kicked my ass to the curb and left me with neither the energy or initiative to devote to weekly (or even monthly) blog posts. But for those of you not on Facebook or also missing my blog posts, I'll recap my 2014 with one picture for each month of 2014. 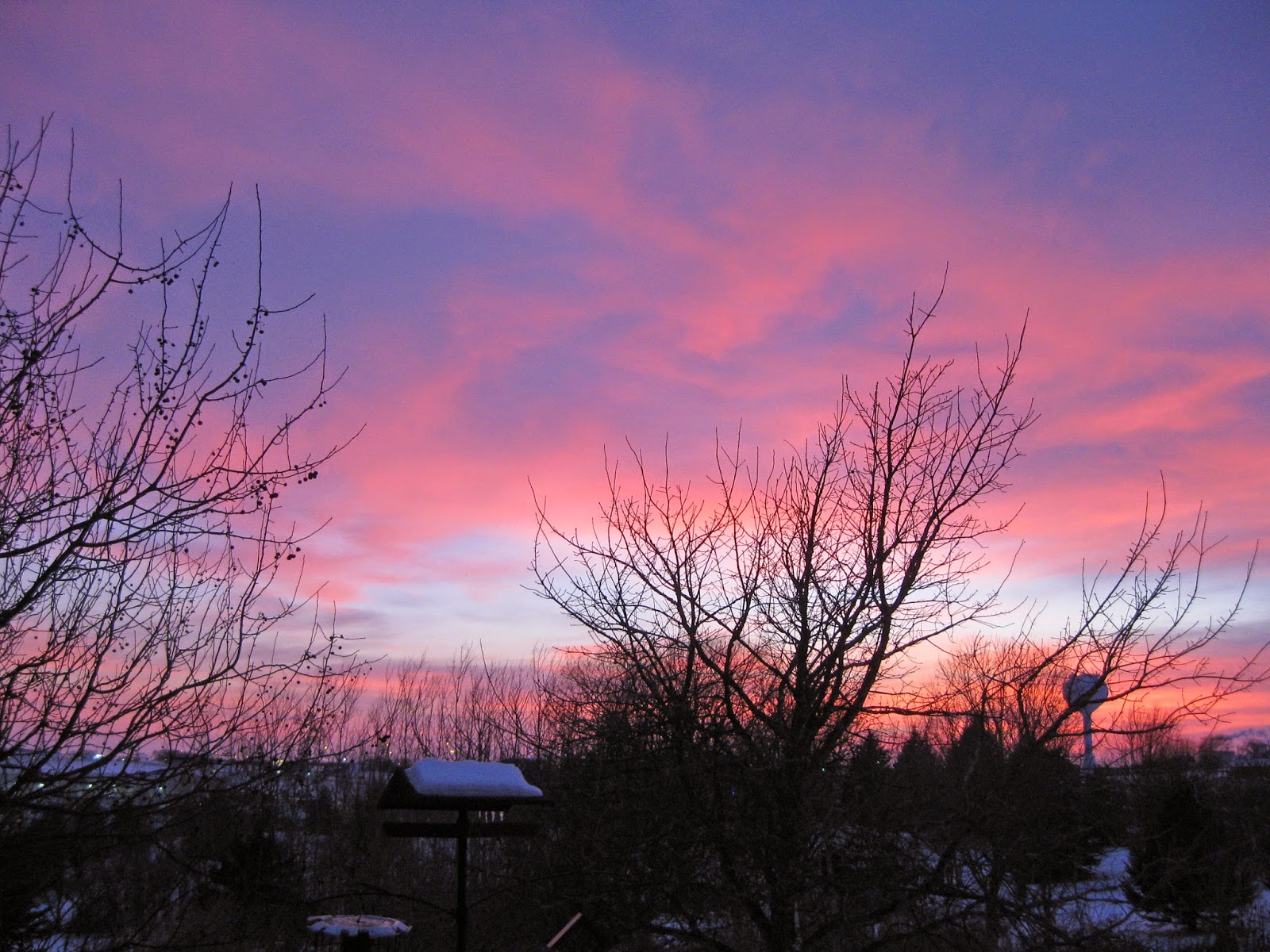 A February snowstorm was beautiful only to those who didn't have to worry about moving all the snow or figuring out how to drive in it! ﻿ 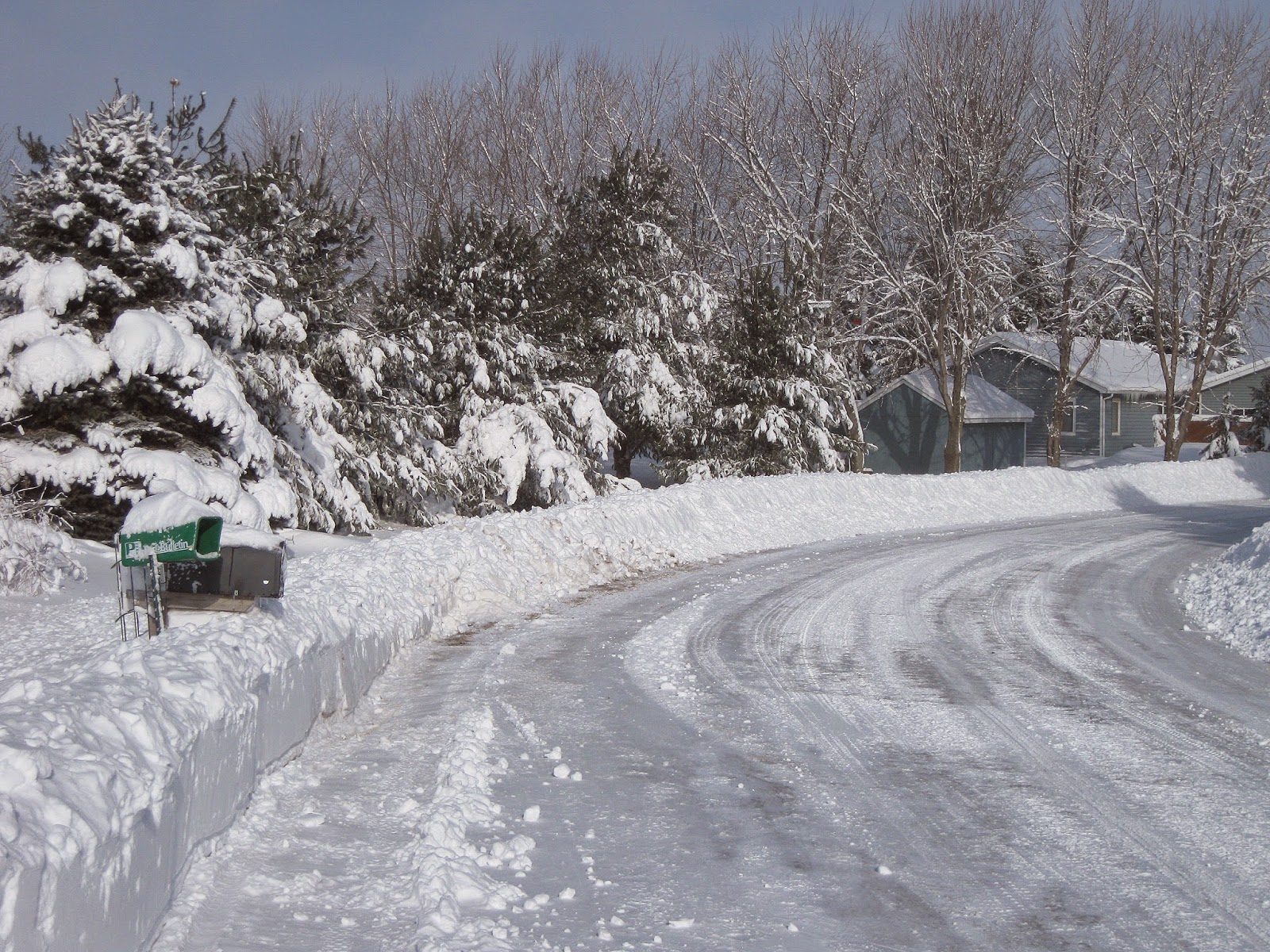 In March I took a trip to California to visit my brother.  It was nice to see green grass, water that wasn't frozen, and birds that wouldn't be back to Minnesota for a couple months yet.﻿ 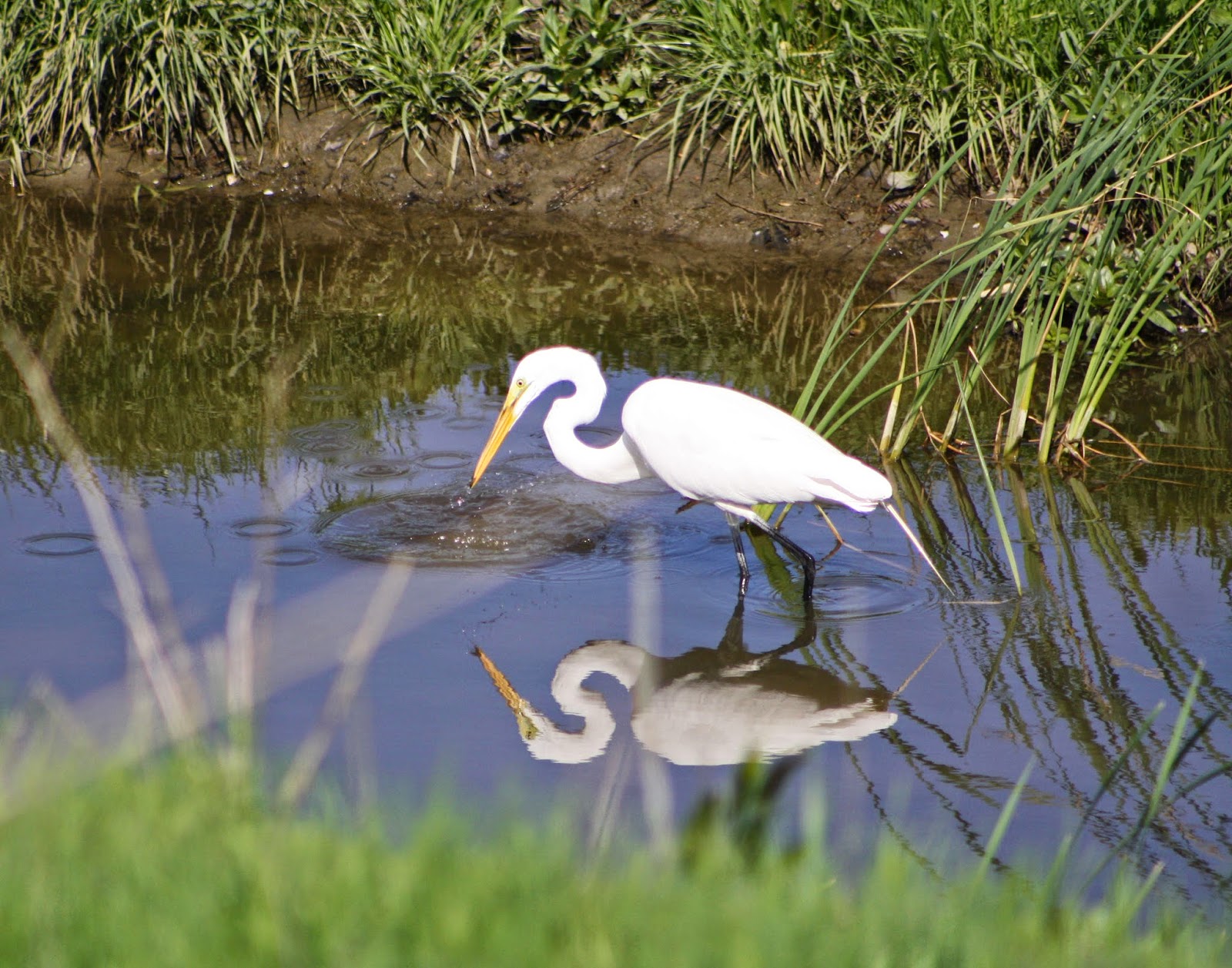 April brought a few spring birds back to Minnesota, including this Robin who was determined to battle that "other" robin taunting him from the window reflection.﻿ 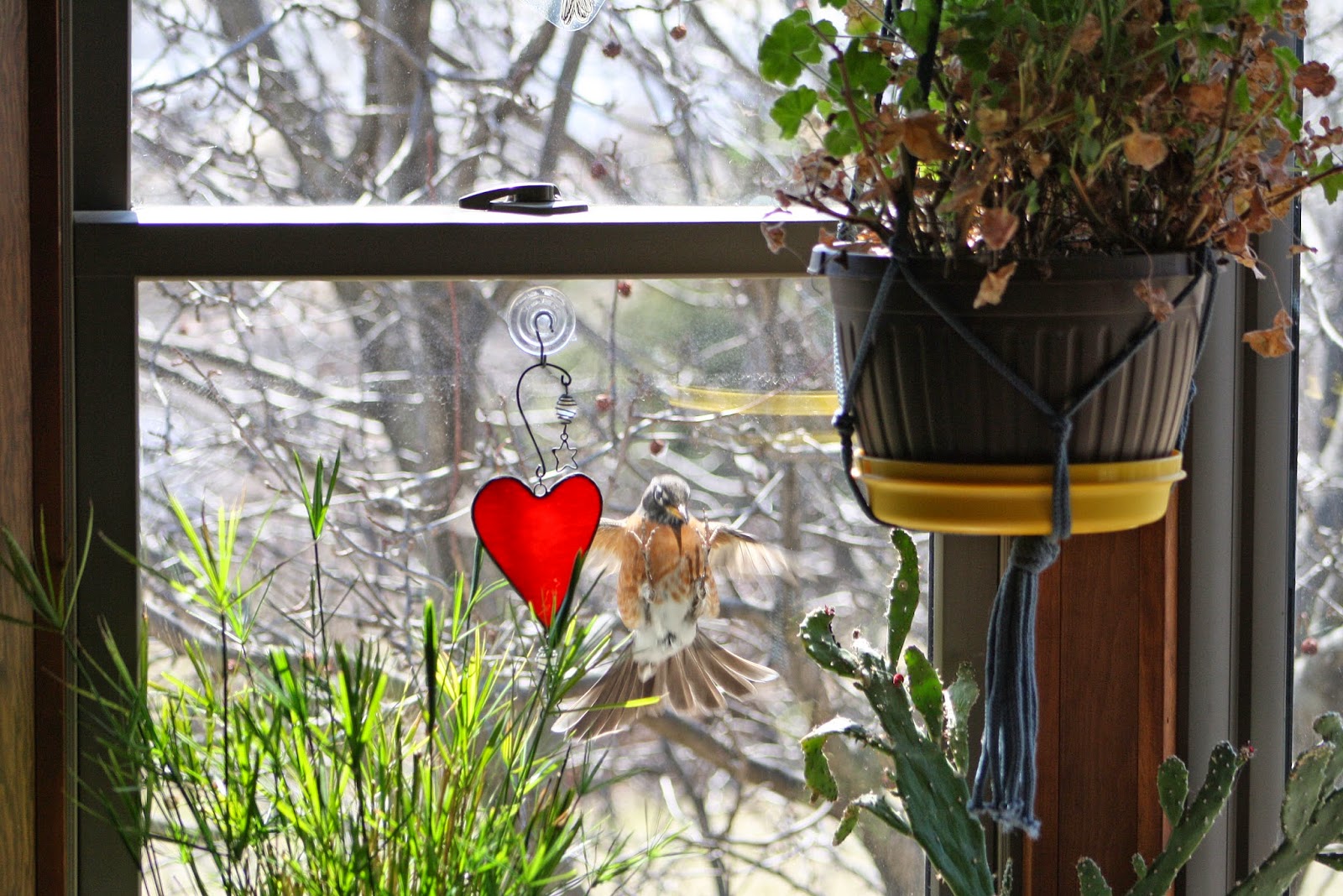 In May the colorful summer birds finally arrived.  They're the hope we hold in our thoughts and hearts during the long Minnesota winter.﻿ 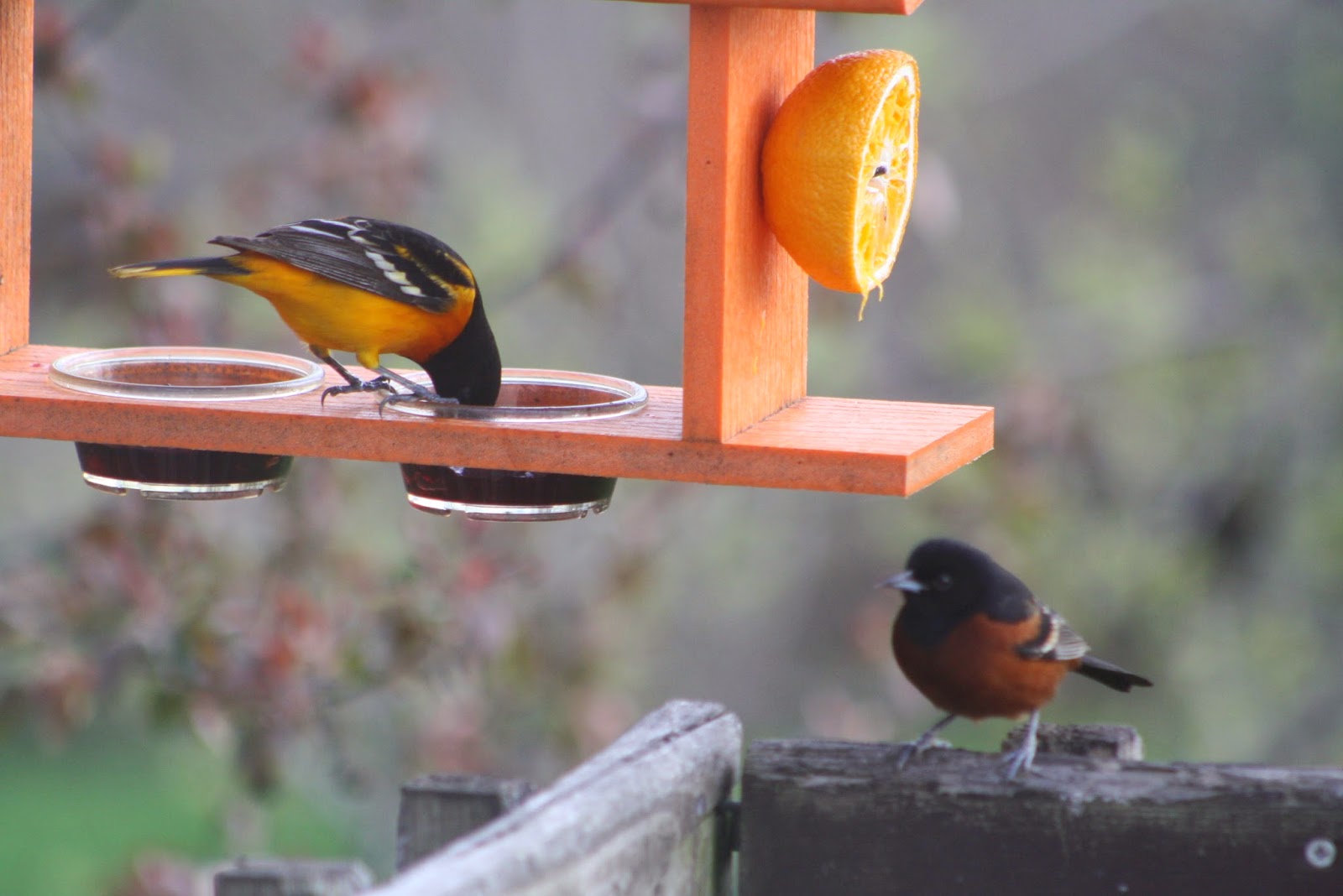 Backyard critters enjoying June clover and other treats falling from the birdfeeder above. 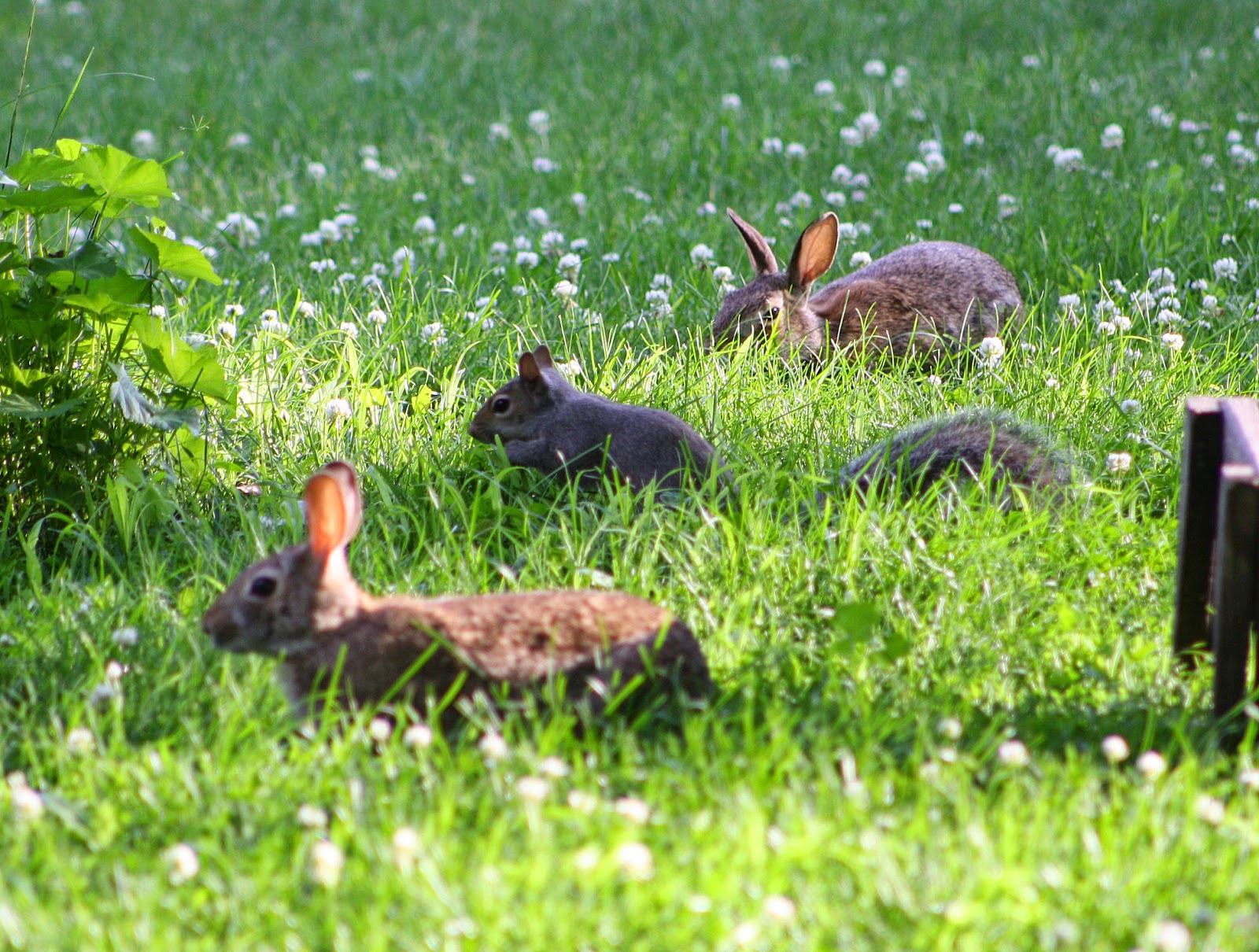 A long July weekend in northern Minnesota gave me the opportunity to photograph this rainbow over Snowbank Lake after a brief late afternoon thunderstorm. 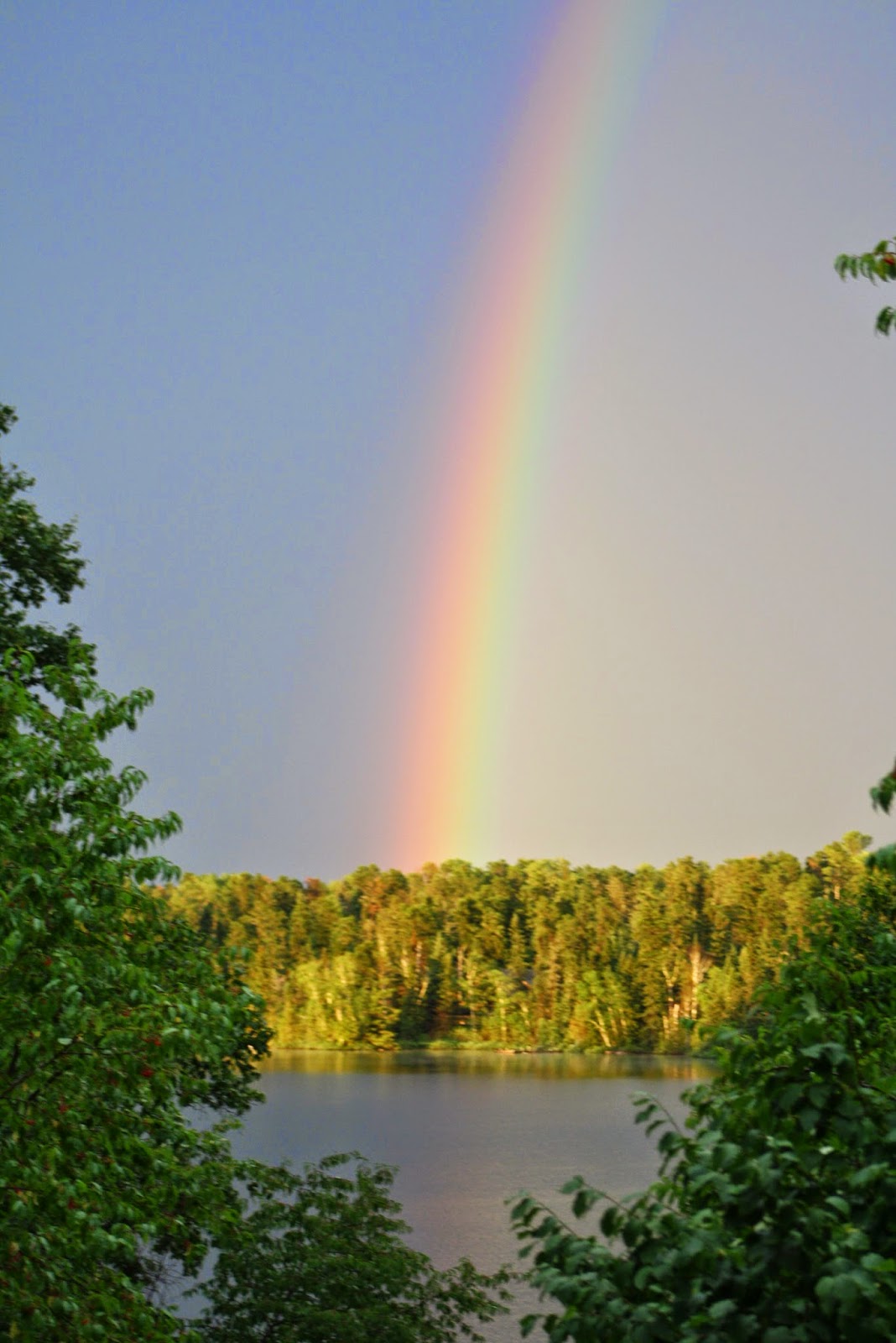 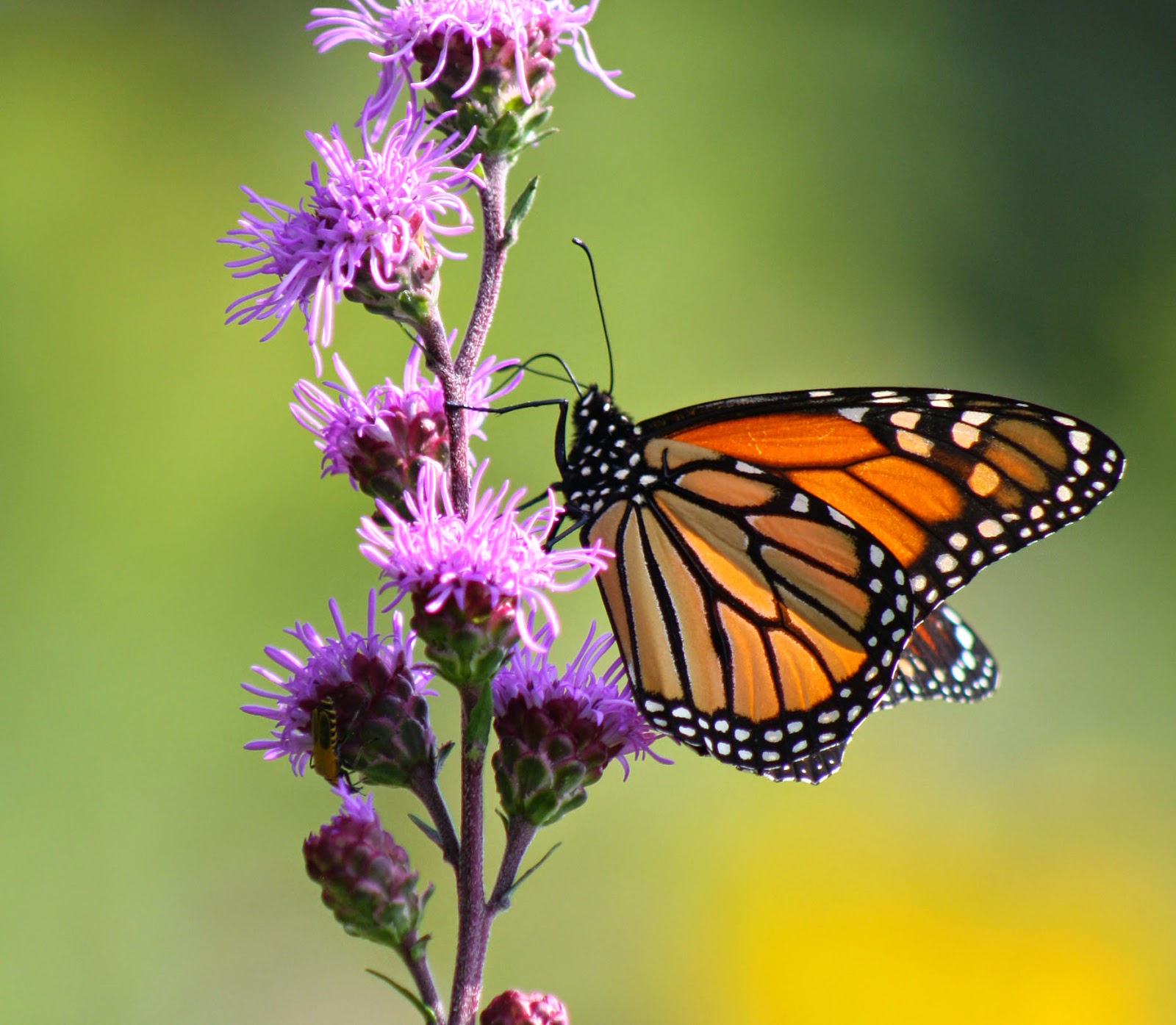 In September, this first year Cooper's Hawk was trying its best to catch one of the birds hanging out on my deck.  Unfortunately, no birds were caught, but I did get the chance to capture this awesome photo! 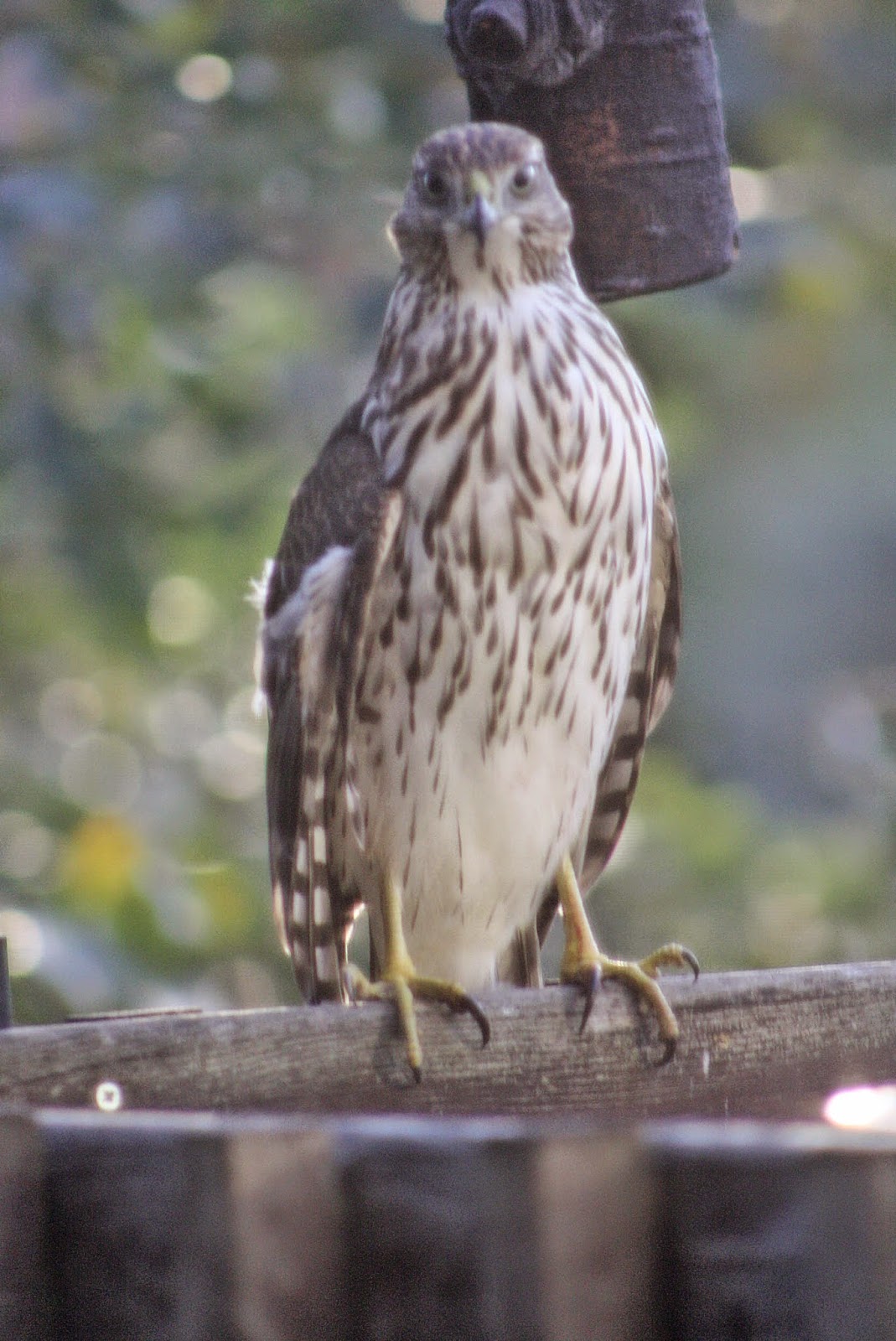 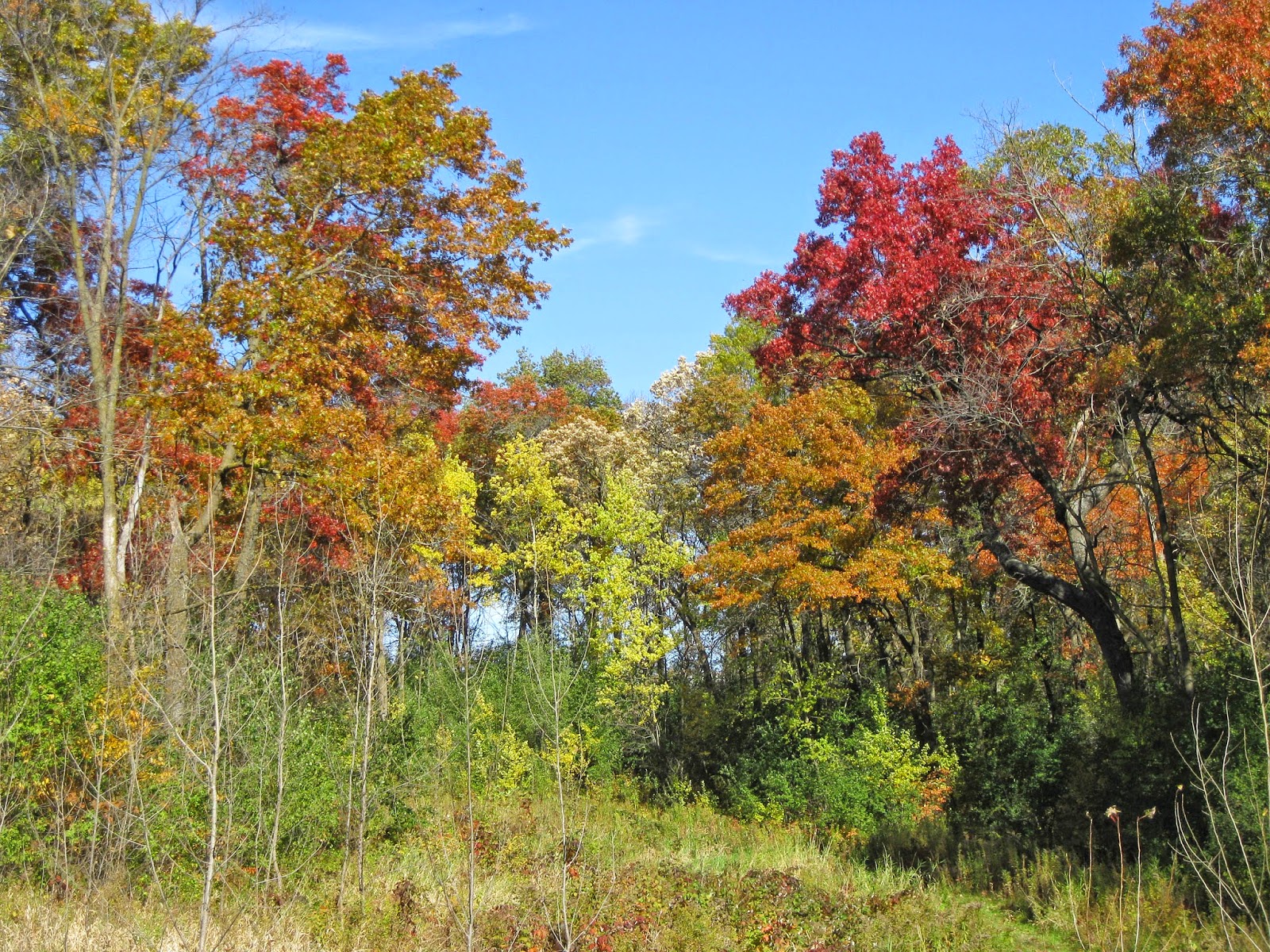 Early one morning in November, this small buck showed up in the backyard to sample some of the corn we put out for birds and bunnies. 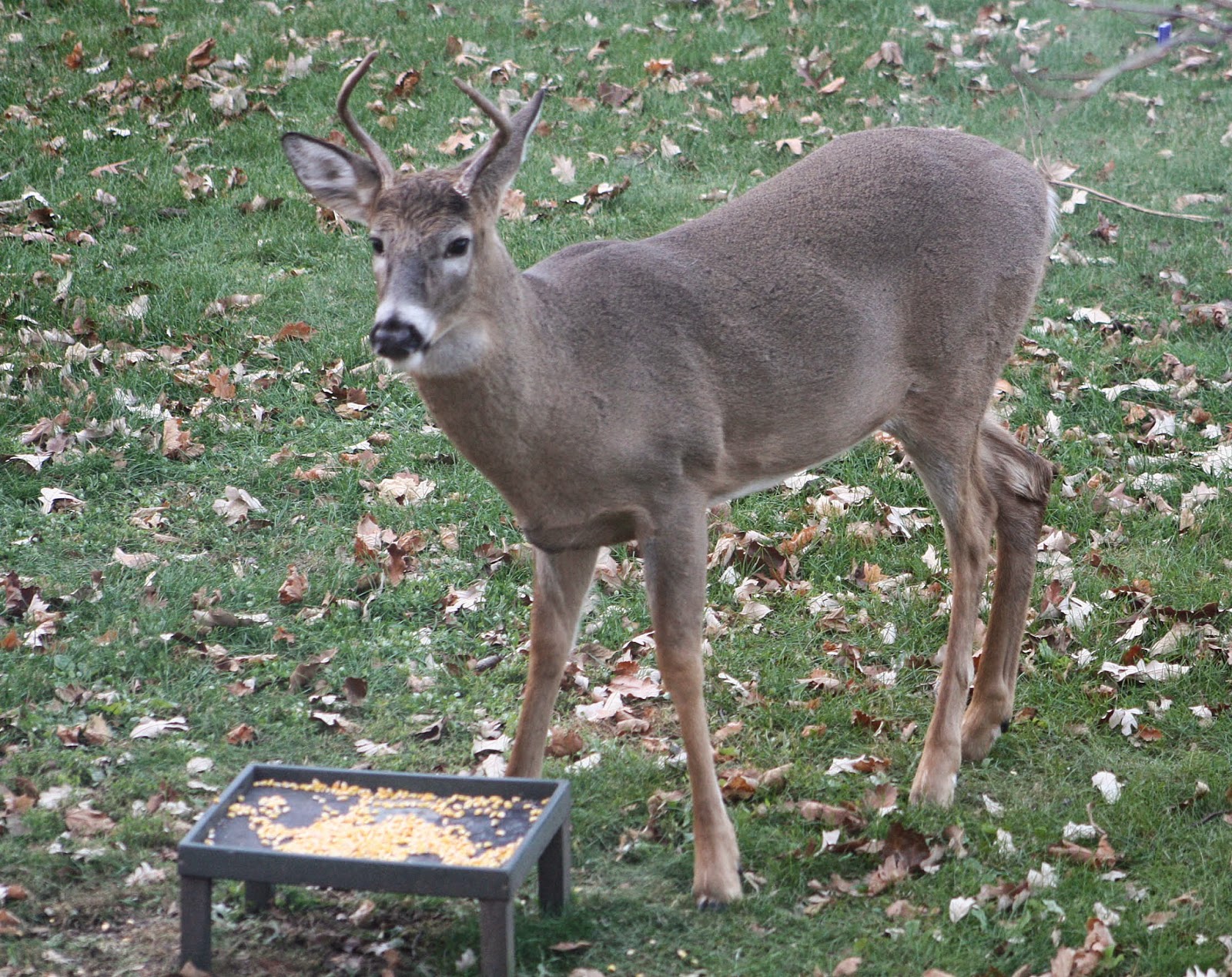 
Happy Christmas from me and my pretty girl Holly the Pibble! 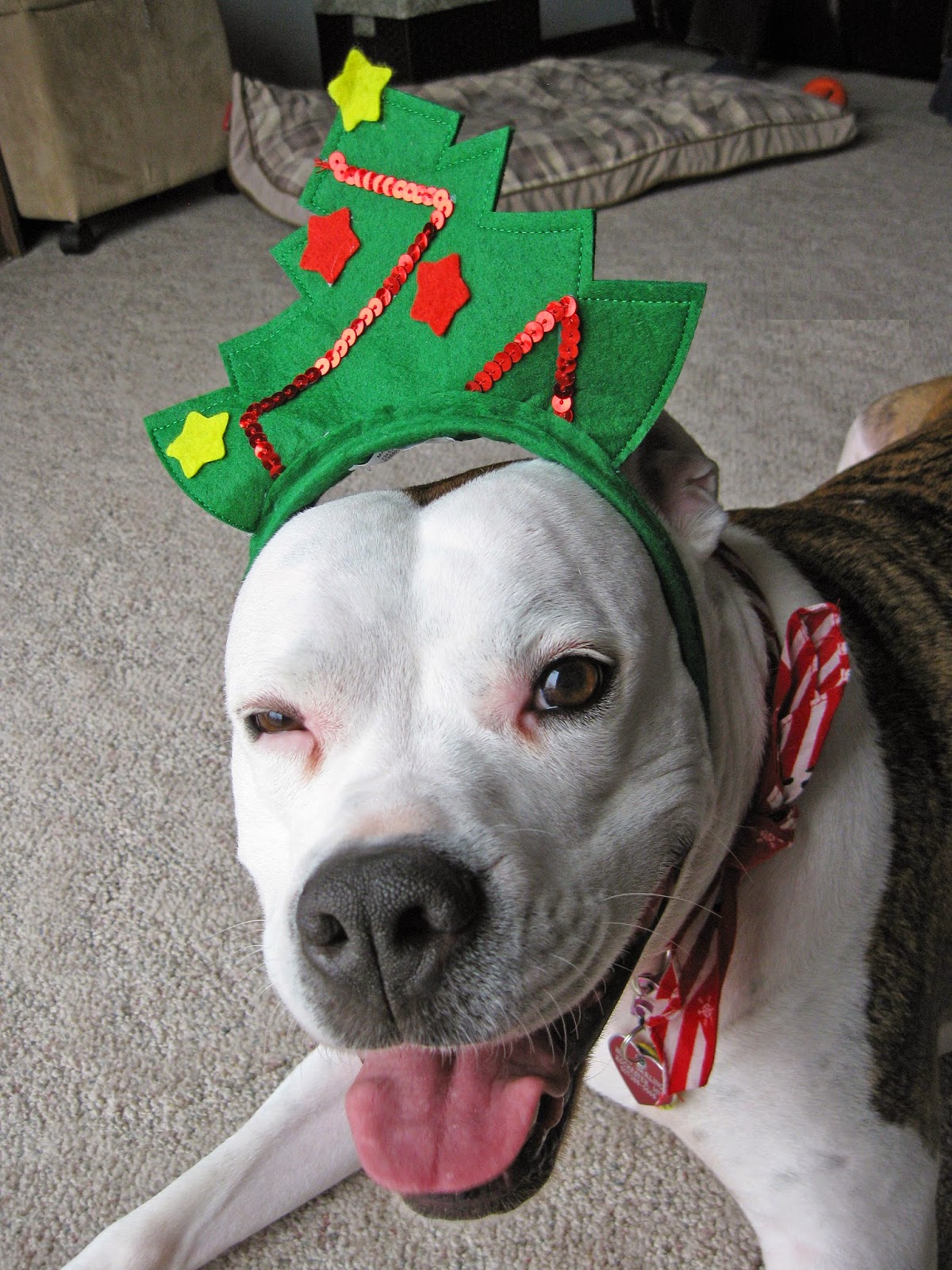