After what seemed to be a fairly mild winter earlier in the season, February and March have decided to make up for the winter snows and  weather we didn't receive in December & January.  The winter blues are really starting to set in so a couple weeks ago, we decided to take advantage of a sunny Sunday afternoon to go for a birding drive (with a stop at the yarn store, of course).  It's a good thing my favorite yarn store is in Winona & right on the Mississippi River as that gives us a good excuse to take my favorite birding drive through the Whitewater Wildlife Management Area for waterfowl viewing and then up the river road on the way home for eagle watching.  Here are some of the pictorial highlights from our Sunday afternoon drive...... 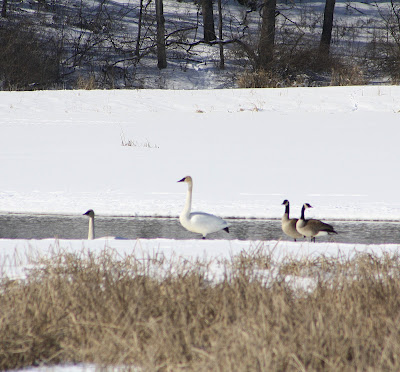 A pair of Tundra Swans have spent the winter again in the Whitewater Wildlife Management Area. They were in exactly the same area as last winter.  Pretty cool! 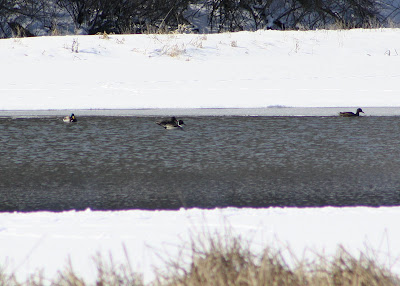 There were some ducks in this little patch of open water also.  I was excited to see this Northern Pintail as it's been quite a few years since I've seen one. 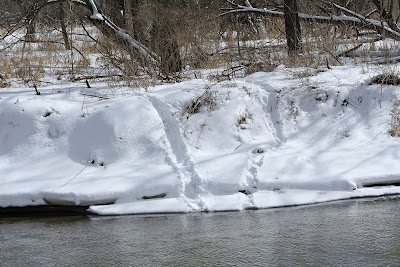 Driving along the Whitewater River I saw these tracks along the riverbank.  I was thinking they were probably made by otters.  What do you think? 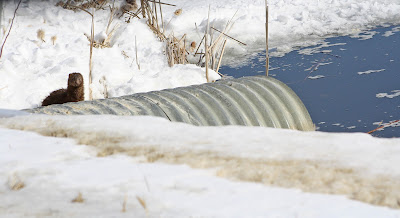 As we were driving past this one little patch of open water, I was scanning for waterfowl when something dark caught my eye in the ditch.  "Back up," I ordered Mr. Johnson.  As we were backing up, I got my camera ready and started snapping pictures as soon as we got past this little critter.  Once I got home and started editing the photos, I was able to ID this furry little creature as a Mink.  Woo-Hoo!  I've never seen one in the wild before and felt extremely fortunate to be in the right place at the right time. 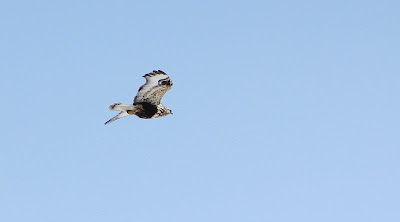 Farther down the road we spotted a large hawk perched in the top of a tree, thinking it was maybe another of the numerous red-tails we'd been seeing all afternoon, I got out of the car and started walking towards the tree with my camera ready for a possible flight shot.  The raptor didn't disappoint me.  I was even happier when I was reviewing my shots and found out this wasn't a red-tailed hawk at all, but a Rough-Legged Hawk who only visits Minnesota in the winter!

Down in Winona, there was a small patch of open water on one of their lakes going in to town.  We stopped there to see if there might be any interesting waterfowl besides the usual mallards and Giant Canada Geese and there was!  Here are several nice Canvasbacks, plus a Lesser Scaup.

I was really surprised to see a Coot hanging out with these ducks too.  Then I read a birding report later in the week indicating that some of these ducks are already starting their spring migration.  I'm glad they decided to hang out at this nice spot in Winona on the day of my visit! 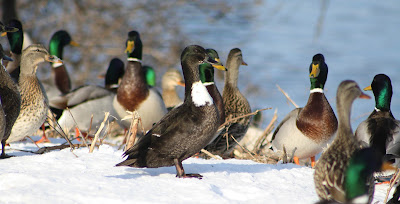 There were even some pretty interesting looking mallards mixed with the regular ones.  Obvious there's been some duck hanky-panky going on here! 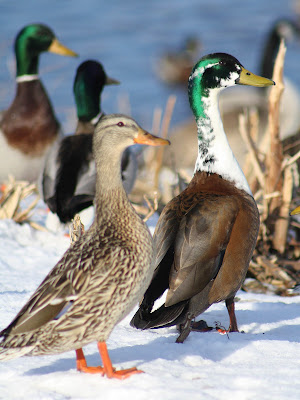 The mallard hen seemed pretty happy with her dapper looking, multi-colored mate.  And I was happy with how nicely they posed for my camera!

It was getting late in the afternoon and close to sundown by the time we finally started up the river road towards home, so the light wasn't the best for pictures anymore, but I did manage to get this one shot of an eagle fishing for its supper in the Mississippi.  There were so many eagles in this area, but most of them were hanging out on the ice at the far side of the open water, and beyond the adequate focus reach of my 300 mm camera lens. 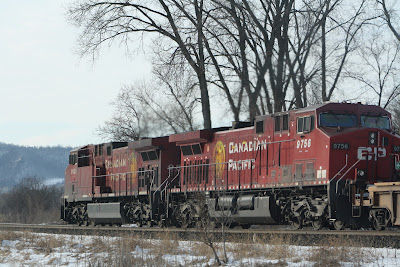 Train tracks also run parallel to the river road, and we usually see at least one train.  This day's train was a long one and the engines were working pretty hard to get all the cars up this gradual incline. 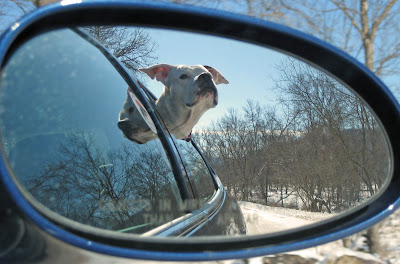 And of course, Holly had a great time.  Even though the temps were only in the 20s, we were going slow enough that she was able to have her head out the window.  She loves the wind in her face and being able to smell all the wild things outside.

﻿I see by my ticker at the top of this blog that there's only a few days until the first day of spring.  Hard to believe it this year, especially with the 20+ inches of snow we've already received in March and much more predicted for the next week.  I'll be very happy when spring weather and birds finally arrive this year!