Since the middle of October, we've taken Holly to the local PetSmart for her first Basic Obedience class. This was new for us too as we never took any of our three previous dogs to class -- Rick just had them trained for hunting purposes. Holly did pretty good with most of her lessons and the teacher told us that she was pleased with how much Holly had progressed since her first week at class. I was happy with her progress too -- especially since we started classes less than 2 weeks after Holly came to live with us.

Holly was the "big girl" in class -- all of her classmates were much smaller than she is. Here Holly's checking to make sure Buster didn't miss any treats. Buster was a rescue dog too. He was a really cute little dog. 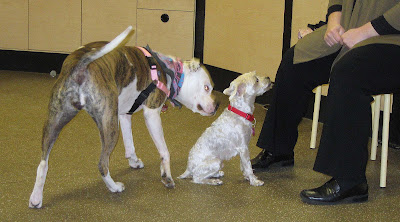 Here Holly's checking to see if she can barge in on the game with Pickwick and Eddie. Pickwick was a very quiet little guy and somewhat trained when he came to class. His mom had already attended training classes previously with Pickwick's big brother. Eddie was a holy terror on his first night of class. He barked all the time and totally ignored his mom and dad. He really benefited from obedience classes and was quite a friendly and well-trained little dog by the end of class. 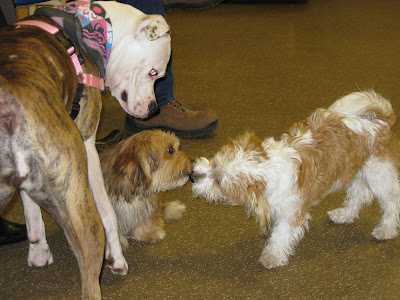 Here's Holly with all 3 of her classmates. See what I meant about her being a "big girl?" You should have seen how these little dogs all freaked out the first time Holly barked in class! (She has a really loud bark!) 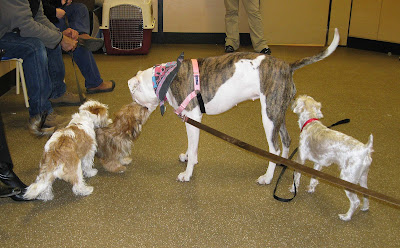 Our final test was last Monday. I was a little worried about Holly passing, but she did just fine. She excels at "sit" and "down," so I knew we'd do fine with that. She even did well with "leave it," although Eddie snuck in and stole the treat from the floor that Holly wasn't supposed to have. Holly did fine with her "sit and stay" as I opened and stepped out the door. Then it was time for the part of the test I was really worried about: loose leash walking around the store. Holly gets really excited when we go to PetSmart and pulls so hard on her leash, but I had her outside in the afternoon chasing a ball for about an hour, so when the time for her walkabout finally arrived, she was pretty worn out and she did fine. Congratulations Graduate! 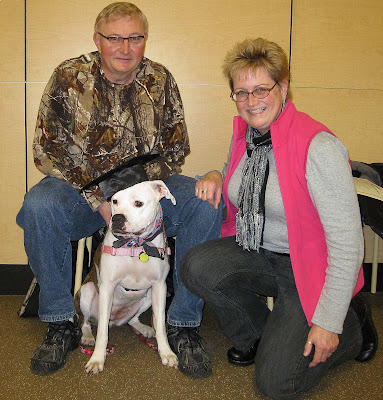 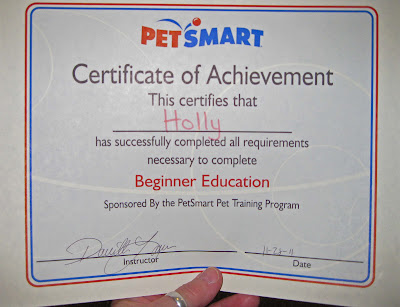 As long as we were in the school mode, I stopped at PetSmart on my way home from work the next day and signed Holly up for Intermediate Obedience class. We'll start back to school on December 12th. This class is going to be a lot tougher, but hopefully Holly (and, more importantly, I) will be up to the challenge.

A Winter Treat for the Birds

My neighbor cut up a deer for one of his buddies today. I went over and asked him for the rib cage and he delivered it to me a couple hours ago. There's quite a bit of nice fat and meat still left on the bones, so this will provide lots of high energy food for the birds. I did this a few winters ago and the birds loved it! It looks kinda nasty, but the birds don't mind. Plus, none of my neighbors can see into my backyard, so no one else will be offended by this bloody carcass hanging in a tree. 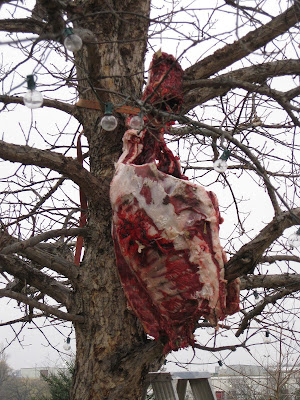 And lookit where it is -- right outside the dining room window! As I'm sitting here at my computer typing this blog post, I have a fabulous view and can hardly wait until tomorrow when the birds discover this rare treat in my tree! 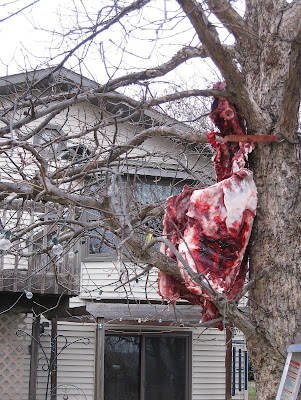 Holly got part of a tasty leg bone out of the deal too! 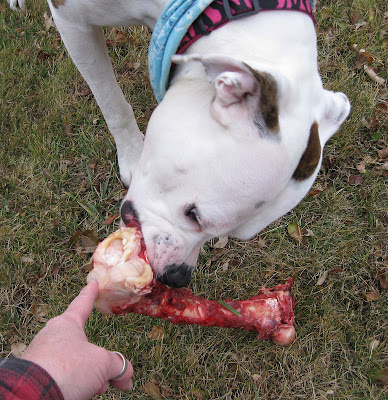 After I got my bloody carcass secured to the tree, I got a little bit more fall yard clean-up accomplished. The weather's been so mild lately -- quite unseasonable for the end of November in Minnesota. This little honeysuckle with a sheltered southern exposure has been fooled into thinking spring's on the way. Unfortunately, our forecast of rain and snow for tomorrow will certainly guarantee that these tiny buds won't be getting a chance to bloom this year! 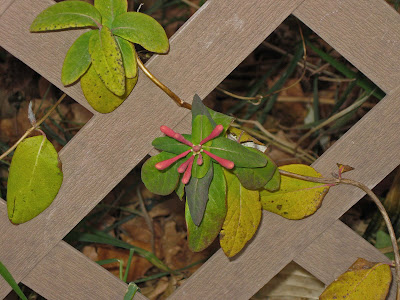 A Visit to the Dog Park

Holly's completed 3 of the 6 sessions of her first obedience training class. She's quite "exuberant" in class and tends to overwhelm her 4 other much smaller classmates. Since class is currently the only socialization event in her life, Holly's teacher suggested we try getting her out with other dogs more, so we drove over to the dog park on Tuesday afternoon. Holly had a good time investigating all the smells of other dogs that had been there previously. 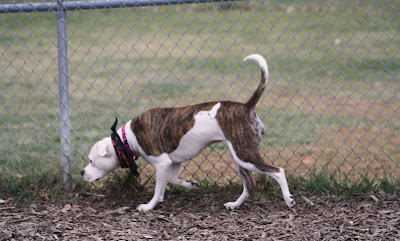 On account of this being my first visit to the dog park, I had no idea we should have brought a toy and some water for Holly. Fortunately, Mojo and his dad were there with a couple tennis balls and Mojo was more than willing to have Holly chase along with him to fetch the tennis ball. 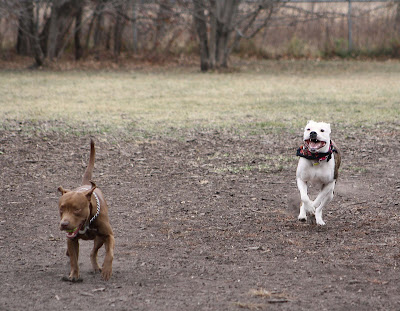 Mojo's only about 1 year old, but he was much better behaved than Holly. Mojo's dad had spent a lot of time training him and offered us a few tips for working with Holly also. 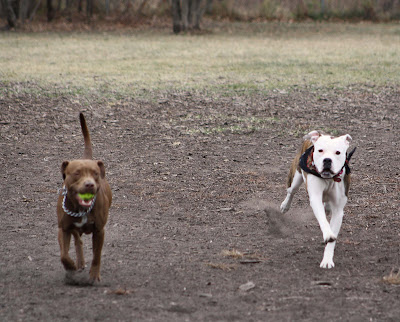 Holly and Mojo played well together and they were evenly matched in speed when chasing after the ball and coming back with it. 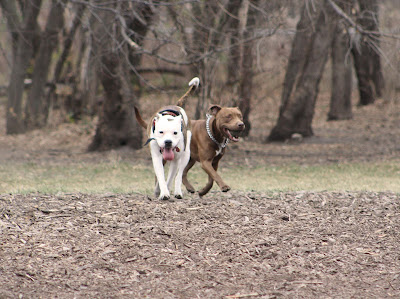 I thought they made a very handsome pair! 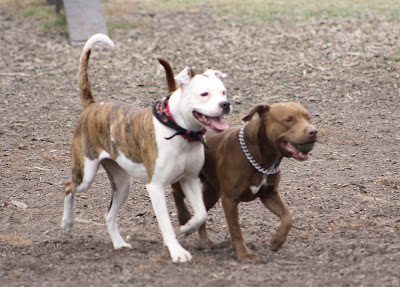 After we had been there for about 15 minutes, another couple showed up with their little black lab puppy. This was a very friendly little dog and wasn't shy at all about meeting Holly. She tolerated the little puppy very well too. 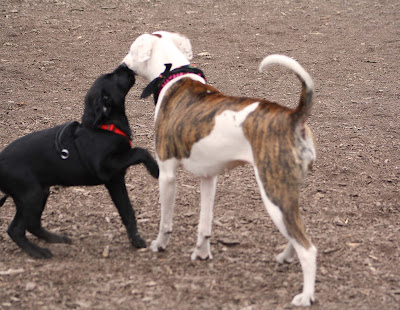 And a few minutes after the puppy's arrival, a couple of women arrived with their huge black lab. I heard one of them say the dog currently weighed about 100 pounds! This dog was even more out of control than Holly -- those ladies couldn't do anything with the dog. Holly didn't back down from this challenger and after a few growls and snaps, we decided that it was time to get Holly back in the car and head for home. 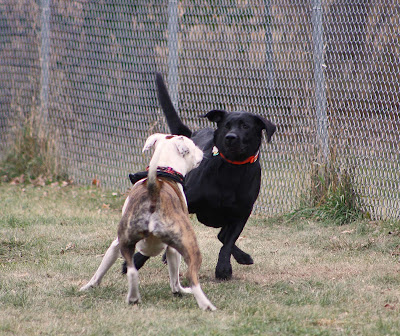 It was fun to see Holly playing with the other dogs in a larger space than her weekly classroom. I will definitely take her to the dog park again, but might try the one at the other end of town. I was not thrilled that this park had so much dirt right in the middle of it and Holly had to have a bath after I got her home to get her all cleaned up and shiny again. I've been past the north side dog park and that entire park is all grass -- no dirt. It's also a little busier than the south side park, but I'll try it once to see how we do there.

On the last weekend of October, we took a trip to Crex Meadows Wildlife Area near Grantsburg, Wisconsin to catch the Sandhill Crane migration. We left early Saturday morning so we could be there in time to see sunset arrival cranes at their nighttime roosting areas in the refuge. We got there early enough to take a drive through the park and observe some other birds. At one area where we stopped, we got to see some Trumpeter Swans. 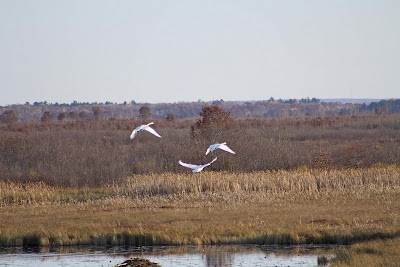 Trumpeter Swans can be seen at Crex most of the year (except winter), so we felt fortunate to be able to see them this close before their migration to warmer climes. 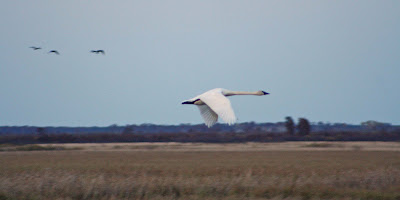 Holly isn't much of a bird dog, but she kept my seat warm in the car while I was out taking pictures! 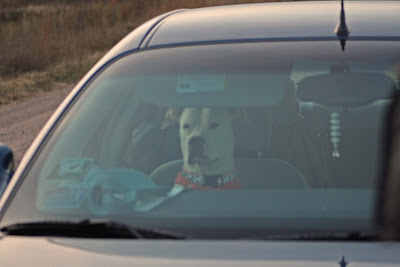 About an hour before sunset, the cranes started arriving. We were at the wrong part of the refuge for the first part of this, but after driving around a bit more and seeing where all the other cars were parked, we did manage to catch quite a few of the cranes still arriving before it was too dark. 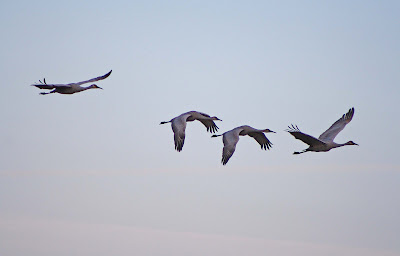 There were cranes everywhere! Here with "landing gear" down......

A group of cranes takes a walk across the marsh. 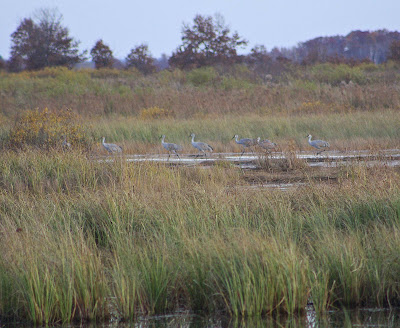 Here's a nice shot of a large flock in silhouette against the twilight sky. It's magical so see and hear so many Sandhill Cranes at one time! 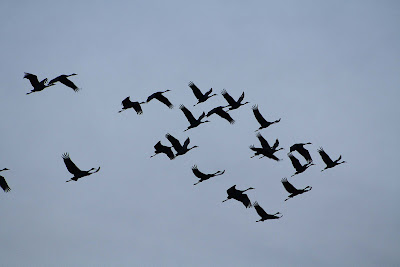 Sunday morning brought another chilly and cloudy day, but we did head back out to Crex before the rain moved in. We saw a few more cranes and some waterfowl, but the biggest thrill for me was this flyover of a first year Rough-Legged Hawk. 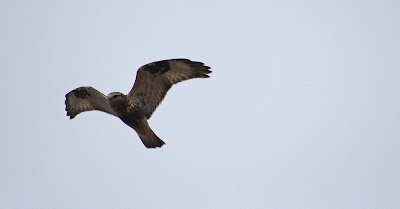 I felt privileged to be able to capture these shots of this beautiful raptor who had made its migration journey all the way south to Wisconsin after being hatched earlier this year somewhere near the Arctic Circle. 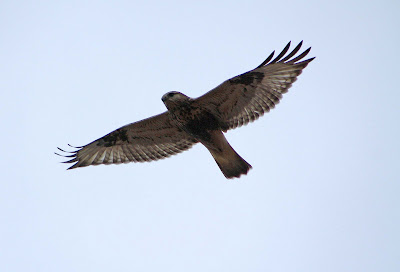 Be sure to add Crex Meadows Wildlife Area and to your birding "must see" list on your next visit to Wisconsin!

Labels: Crex Meadows Wildlife Area, nature, raptor, sandhill cranes, swans, Wisconsin
Newer Posts Older Posts Home
Subscribe to: Posts (Atom)
All images and text are property of RuthieJ and the 'Nature Knitter Blog' and may not be used without permission.