Hope you all had a very happy Easter Sunday! We drove down to Mom & Dad's and celebrated with the rest of my family. My little nephew Ethan had an excellent Easter egg hunt. 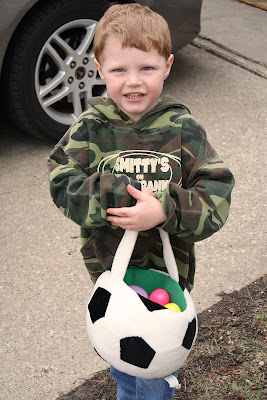 After finishing our meal, stacking the dishes for Mom to fill the dishwasher and packing up some delicious leftovers to bring home, we headed for home with a short detour through rural Fillmore County to see if we could find the White Winged Scoter that had been spotted a week ago. Along the way, we saw this fox running across a field and heading for the road. 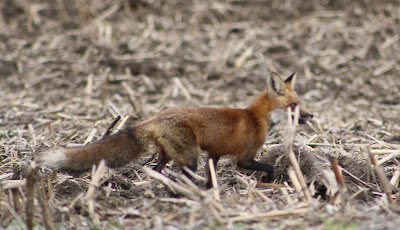 After turning the car around so I could take some better photos, the fox had the same idea -- turn around and run! 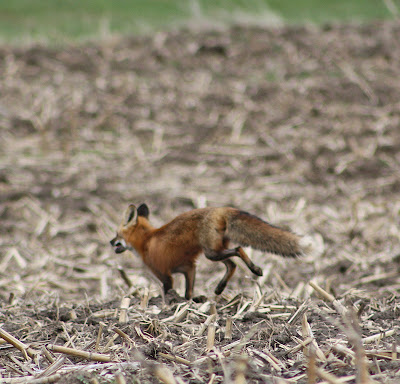 After turning down another gravel road, we finally spotted the pond where the scoter was supposed to be hanging out at. I first spotted this Lesser Yellowlegs scouting the muddy edge closest to the road. 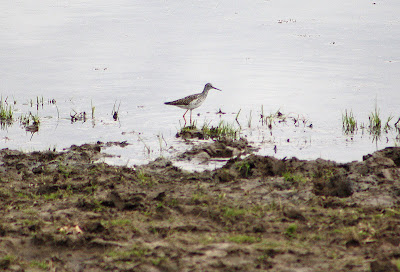 And there he was! The White Winged Scoter! (click on the photo to enlarge it) The first ever recorded sighting of this bird in Fillmore County. 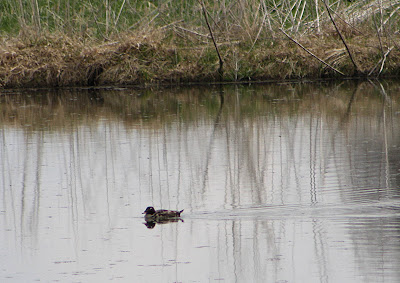 We first heard about this duck earlier last week when we were out birding and ran into Chris Hockema. Chris told us the duck's plumage was somewhat different than what's usually seen on an adult males scoter, but that the dark head and white eye "comma" were easily seen for a definitive ID. I was really glad this duck was still hanging around and we got a chance to see it. Thanks to John and Chris Hockema for locating the duck and sharing its location with other Minnesota birders.

Mr. Johnson decided we should take advantage of a bit of nice weather today (between snowy and rainy days) and do a little birding close to home (as gas has now gone up to $3.79 here!) Our first stop was the County 9 wetlands, about a mile east of Rochester. As usual the Giant Canada Geese and Coots dominated this large pond, but we also saw some Northern Shovelers, Ring-Necked Ducks, a Bufflehead (lifer!) pair and one Redhead. No shorebirds were seen, but I did spot a Swamp Sparrow flitting around in the tall grasses close to the observation deck where we were standing. I managed to get a couple photos that were good enough to confirm this little bird's identity. 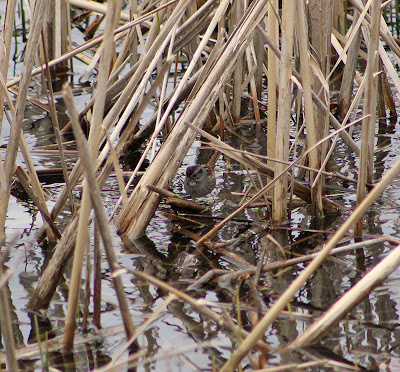 Not a life bird, but it was still neat to spot this early spring arrival and get some good photos. 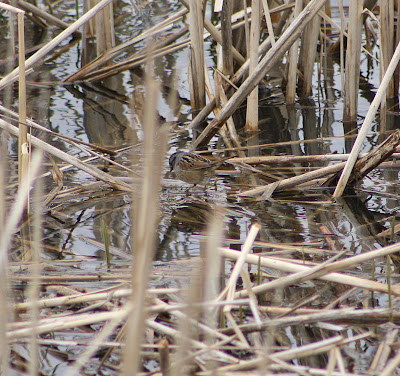 After a quick lunch at KFC (have you tried any of their $5 lunches? Delicious!!) We headed a few miles west of Rochester to the Kalmar Reservoir. Most of the waterfowl was at the other end of the reservoir, but fortunately one of Rochester's premier birders, Chris Hockema, was also at the reservoir with his spotting scope and he helped us to locate some waterfowl that we hadn't seen yet this year: Eared Grebe and Ruddy Duck. Like the County 9 wetland, Coots were the dominant bird here. 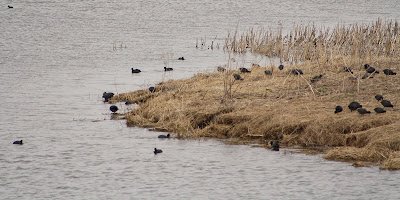 I was amazed to see that many of these coots were spending quite a bit of time on shore poking around in the grass. Not sure what they were foraging for, but it was interesting to see them walking around on land.

As were were pulling out of the reservoir driveway, I saw these 2 handsome fellows hanging out together at the little waterway next to the road. I never thought of Mallards as particularly large ducks, but this guy just dwarfs the Blue-Winged Teal drake. An odd couple for sure, but they certainly posed nicely for my camera, don't you think? 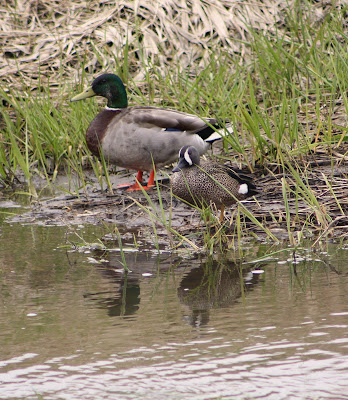 More rain is in the forecast for tonite, tomorrow and maybe a little bit on Saturday, but Sunday is supposed to be sunny before the next round of rainy weather moves in for next week. Hopefully the weather will straighten out soon and we can get started on our next birdquest -- migrating shorebirds.

A Trip to the Alpaca Show

Today Mr. Johnson and I took a trip over to Owatonna to visit the Minnesota Alpaca Expo. I found out about this event months ago on Ravelry and thought it might be fun to check it out. 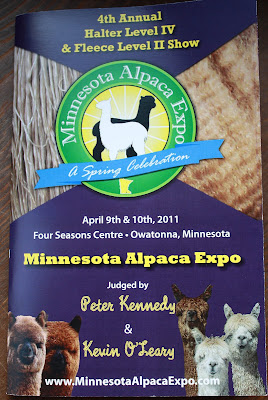 There was no admission fee (how great is that?) We spent a couple of enjoyable hours wandering through the arena and marveling at all the cute faces. 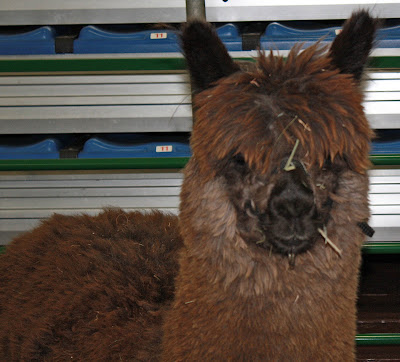 There are 2 different varieties of alpacas. These are the Suri alpacas. They have long shiny locks like very soft, slightly curly hair. 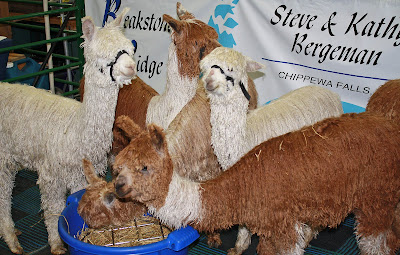 And these are the Huacaya (pronounced Wuh-kai-ya) alpacas. They are fluffy like teddy bears. 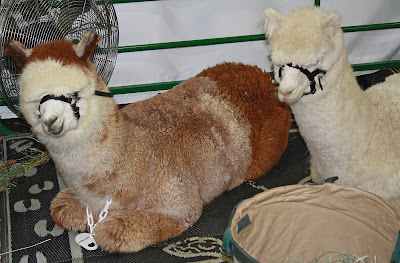 They use their ears to express emotion. This one was not happy about me taking its picture and turned its ears way down around behind its head. 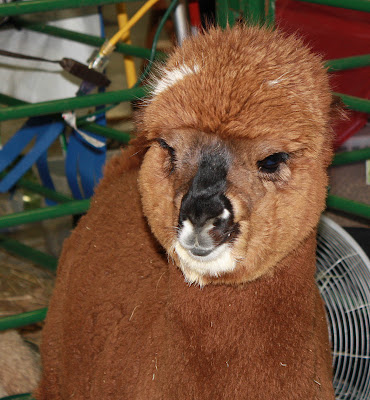 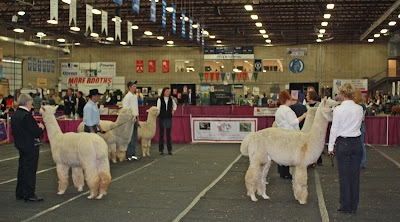 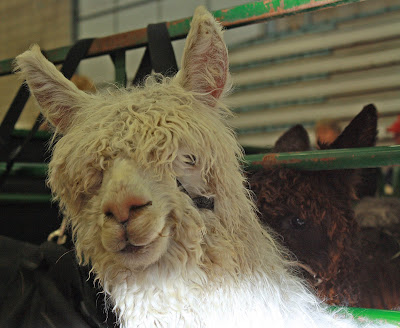 This alpaca and its owner were on their way back from the show ring. 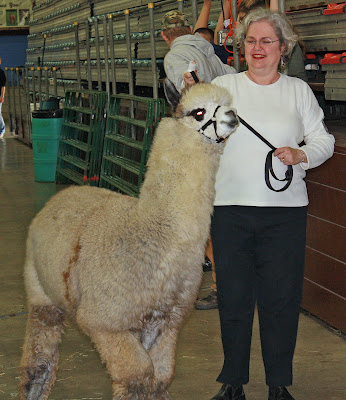 Aren't they sweet looking? We were most surprised at the different sounds they make. Mostly a high-pitched humming, but we also heard one making some little rhythmic squeaky noises too. 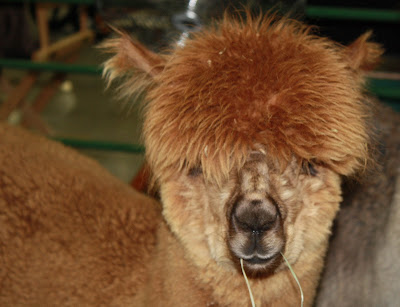 Here's a Suri and Huacaya together and you can really see the differences in their fleece. (also note their ears......not liking the camera at all!) 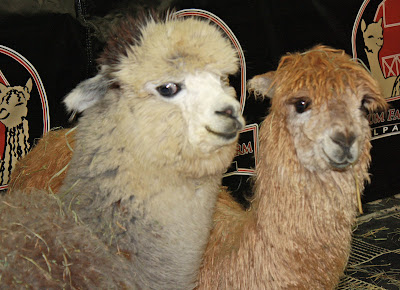 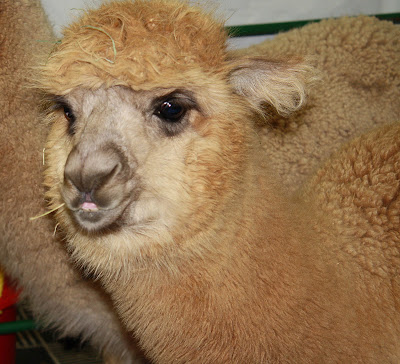 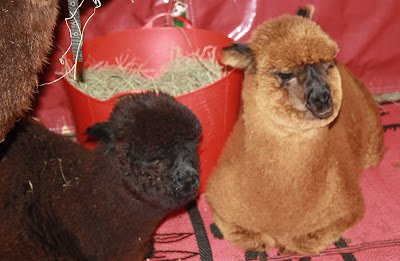 And of course, there was yarn! Lots of yarn! This vendor was my first and last stop at the expo. 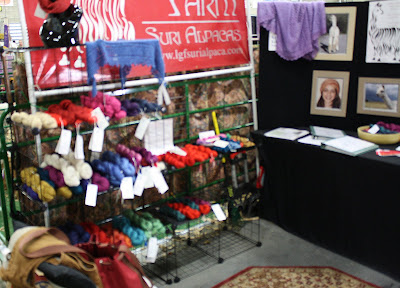 And I bought this skein of beautiful blue yarn from her (400 yards!) You can't believe how soft it is. 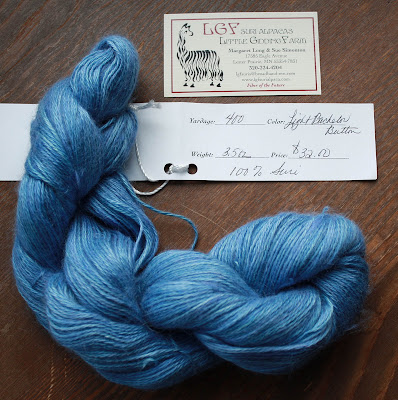 What a fun day. I'm really glad we went and will definitely watch the calendar for next year's dates and the chance to attend again.
Posted by RuthieJ at 4/10/2011 09:50:00 PM 7 comments:

Labels: alpaca expo, yarn
Newer Posts Older Posts Home
Subscribe to: Posts (Atom)
All images and text are property of RuthieJ and the 'Nature Knitter Blog' and may not be used without permission.