﻿Yesterday I had to call the vet and make that difficult appointment that every pet parent dreads.  Poor old Penny has been in poor health for months and recently had begun having difficulty getting to the litter box, some trouble with walking, and frequent vomiting.  She also slept about 22 hours of the day.  I don't think she was in pain, but it had become increasingly difficult for me to see her struggle with these things each day.  This is the one thing about having pets that I really, really hate!  I've had to make this decision for all of my furry babies and it never, ever gets any easier.  The staff at the vet clinic were so wonderful, giving us all the time we needed to say good-bye.  I know Penny didn't suffer and I was able to hold her in my arms until she went to sleep.  Even though that's the hardest part, it's important for me to be able to surround her with my love as she makes her final journey over the Rainbow Bridge and to repay her for the unconditional love she's given me for so many years. 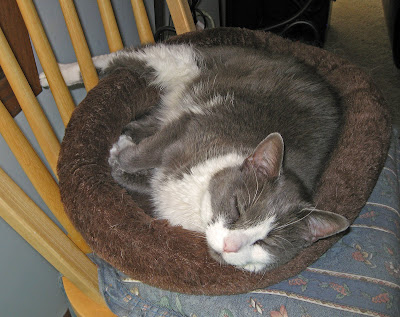 Penny was 16 and a half years old -- the longest-lived kitty of all three kitties that we've had over the years.  I left work early this afternoon so I could spend some time with Penny.  Since it was such a lovely day, I decided we would spend her last afternoon outside.  There was nothing she loved better than being outside and I only ever let her go out for a few minutes every now and then.  After sniffing around and nibbling on some weeds, Penny was content to just lay in the grass and I was happy to sit with her, stroking her pretty fur and listening to her purr. 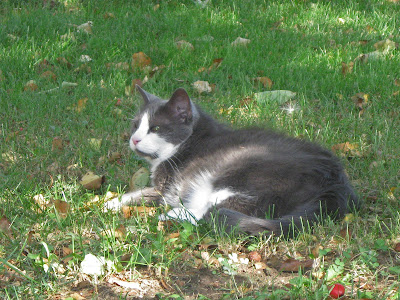 Holly got to spend some time with Penny too.  As Mr. Johnson and I were looking through the photo album and reminiscing about Penny's life with us, we realized that she had been a "sister" to all 4 of the dogs we've had.  A lot of times Penny acted more like a dog than a cat.  She was a good friend to all of our dogs, but best friends with Sophie because they were the two closest in age.  They had some good times. 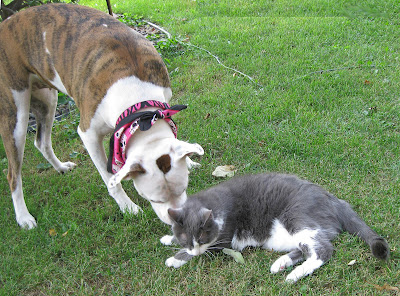 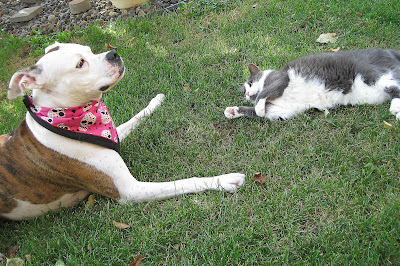 After we got back from the vet we buried Penny in the hosta garden under the deck -- that was one of the first places she'd head to when she got outside.  I found a heart-shaped field stone amongst my landscaping rocks and will take it to work tomorrow at my cemetery memorial job so my boss can get it sandblasted for Penny's final resting place.

There was one bright spot at the end of our sad day though.  Right as we were ready to go in the house, the neighbors stopped over to show us their new puppy.  Meet Theo!  He's a sweet little boxer/pibble cross just like Holly.  He's 7 weeks old and I imagine this is what Holly looked like when she was a puppy.  I'm looking forward to watching Theo grow up and hope he will become a good playmate for Holly. 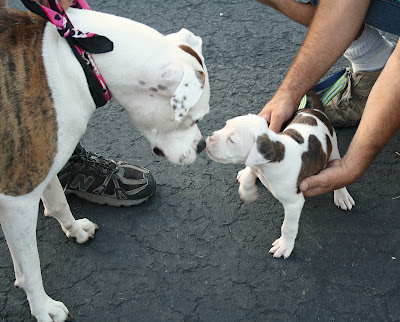 (If you click on the picture to enlarge it, you can see Theo's little pink tongue giving Holly a tiny kiss!)

Labels: pets
Newer Posts Older Posts Home
Subscribe to: Posts (Atom)
All images and text are property of RuthieJ and the 'Nature Knitter Blog' and may not be used without permission.