﻿Last Sunday afternoon Mr. Johnson was outside washing the car when he happened to look up and notice a big bird on the TV antenna.  Because he's the well-trained spouse of a birder, he immediately came to the back door and told me to get my camera because there was a hawk on the TV antenna!  I went out the garage and took this picture of the hawk back-side.  Do you know what it is? 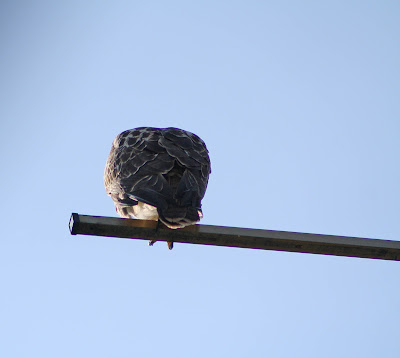 I knew I could get a better view of this huge hawk from the deck on the other side of the house, so I went back inside and crept slowly out onto the deck.  Fortunately, this hawk didn't notice my arrival..... 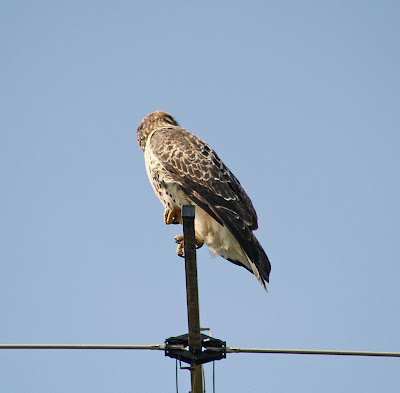 The TV antenna tower is about 40 feet high, so it's an excellent observation tower if you're a hawk! 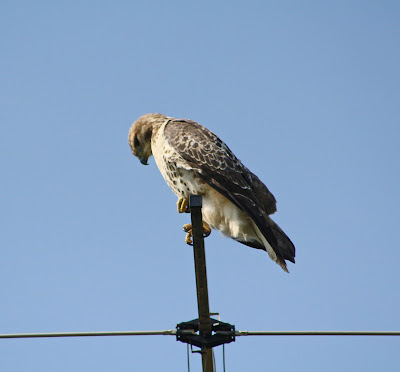 This hawk seemd to be relaxing and just enjoying the view.  If you notice on most of these pictures, its right foot isn't even clutching the antenna pole! 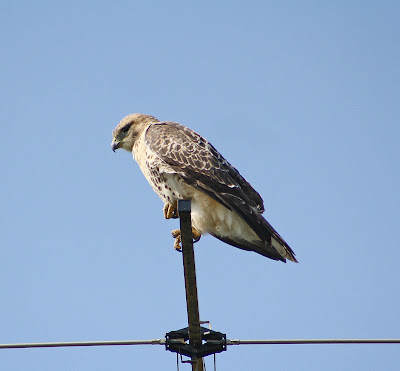 I noticed there weren't any squirrels hanging around the backyard bird feeders while this hawk was up there, but all the other little songbirds in the backyard were extremely vocal in their alarm calls. 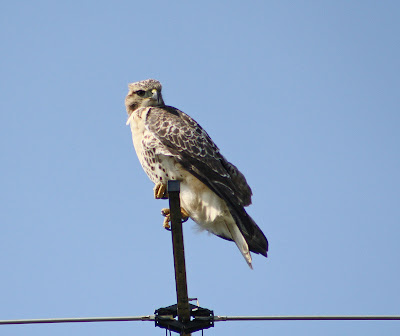 Then the hawk gave itself a mighty, all-over shake -- feathers floating away on the afternoon breeze..... 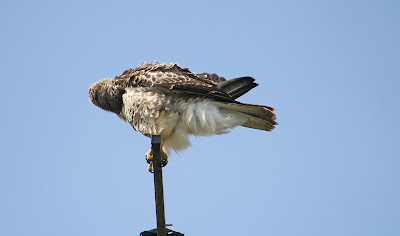 Then a moment to settle the feathers and get everything back in correct position again...... 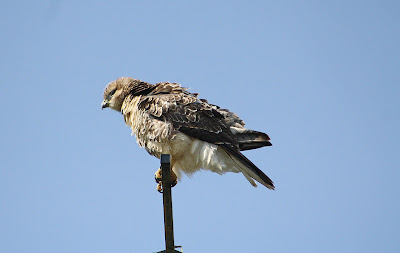 And in an instant the hawk was airborne again! 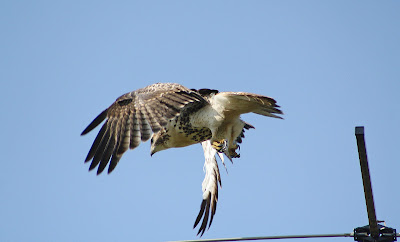 I love the continuous shooting feature on my camera for photo opportunities like this and I was thrilled to be able to capture the majesty of this beautiful juvenile Red-Tailed Hawk in flight. 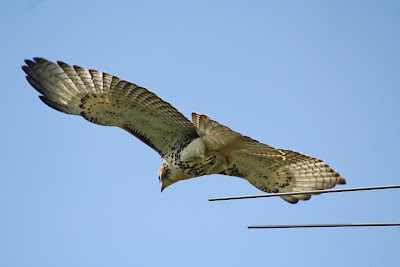 In the woods about a quarter-mile from our house, there is a mated pair of Red-Tailed Hawks that nested successfully again this year.  We see them frequently during the year and this juvenile has been hanging around for several weeks now.  I often hear its pitiful calls and I've seen the parents nearby, so I know it's not been abandoned yet.  Plus there's an abundance of small mammals and rodents in my backyard habitat to support a family of raptors.﻿  I hope I get the chance to see this youngster up close again this summer.

This post is dedicated to my dear friend Martie (the Taos Sunflower).  I never look at a sunflower without thinking of her!  ﻿

I have some "volunteer" sunflowers growing in my little vegetable garden.  I think the chipmunks might have had a paw in that....... 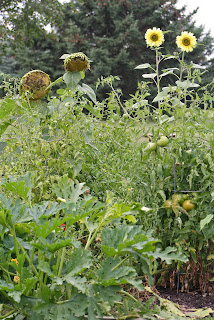 The sunflowers don't interfere with the tomatoes or zucchini, so I let them grow because my goldfinches, cardinals and chickadees love sunflower seeds! (plus it's free seed!) 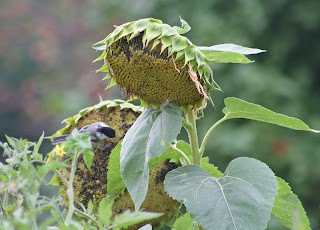 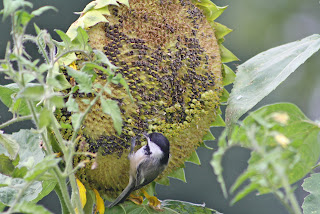 Since I don't use any pesticides, there are lots of bugs in the garden too.  They don't seem to bother my veggies or flowers much -- the birds do an excellent job of the "insect extermination" chores for me.  And I count on the bees to complete all pollination activities so I can grow lots of tomatoes.  Mr. Bumble Bee takes this task very seriously and as you can see, he's already picked up quite a bit of pollen today! 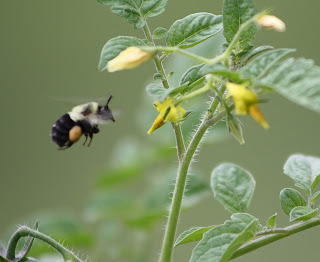 Tomato blossoms are OK, but Mr. Bumble Bee knows that he can get the biggest "bang for his buck" on the multiple blossoms of this sunflower! 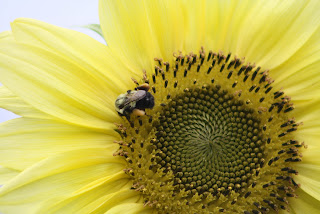 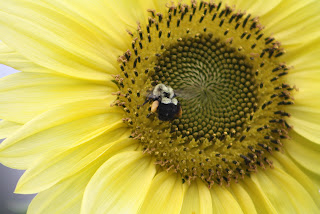 Look at him go!  Making his way around the entire flower! 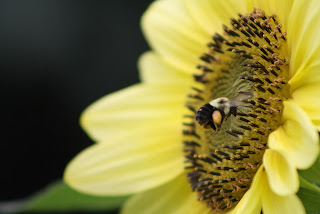 By the time he was ready to fly away, he had collected so much pollen on his back legs that he could barely fly!  He really had to work at getting up some speed for the journey to his pollen storage facility.  (What do they do with that pollen anyway??) 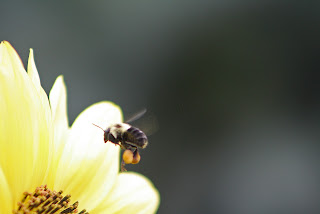 Finally got the landing gear retracted and he's off!  Good-bye Mr. Bumble Bee!  Thanks for allowing me to photograph you.  You're welcome back anytime & bring your friends too!  It's a short summer season here in Minnesota and we have to enjoy these flowers while we can! 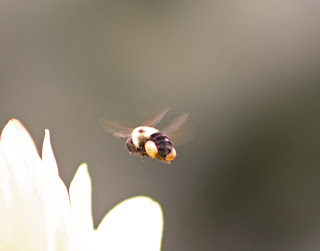 It's been almost a year already since Holly left the shelter to come and live with us here in her "forever home."  Every day we're treated to her happy smiles. 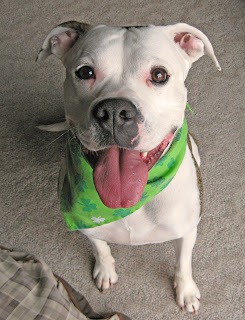 ﻿Holly did very well in her scholarly pursuits at PSU (Pet Smart University).  An additional benefit is that we learned quite a bit about dog training too ("it's all about the treats!")  I only wish that we had taken our previous three dogs to obedience school.  I would recommend this training to anyone who gets a new dog -- and even though Holly was 3 years old when she started school, she was a fast and excellent learner.  I believe more classes are probably in her future. 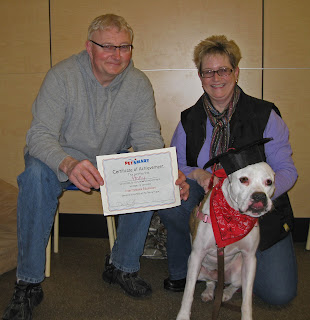 Holly would like us to look around for a doggie driver's education class...... 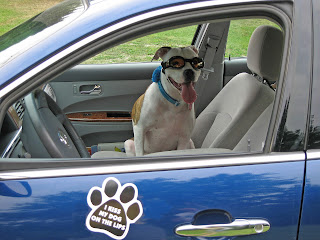 We have found out over the past year that Holly is a champion napper.  What a difference from the three  energetic German Shorthaired Pointers we had as pets prior to Holly!  Holly does have her high energy moments, but mostly she's really laid back.  Holly will nap by herself......﻿ 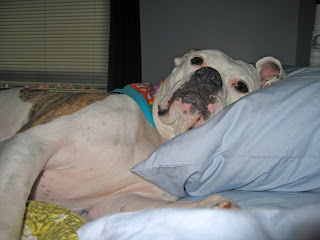 ﻿but she actually prefers napping with her people!  She's usually right between us at night. 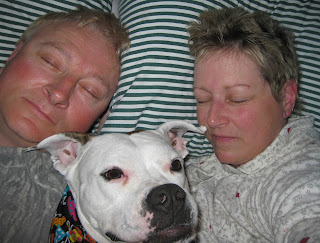 Holly also enjoys afternoon naps  -- especially on the couch with her mom!﻿ 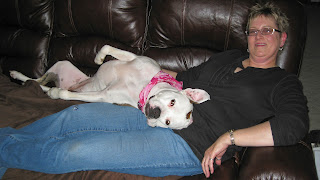 We didn't know Holly was a lap dog when we got her, but she's gotten her dad trained to help her up on his lap when he sits down. 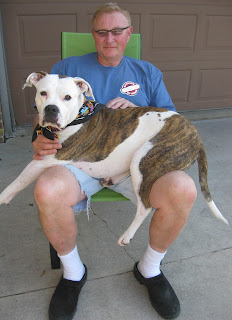 Holly loves to play.  This is a "soccer" game she plays with us in the kitchen when we're washing dishes.  She brings a toy over by the sink and then she stands in the doorway while we try to kick it past her.  This is Holly's "goalie" stance.﻿ 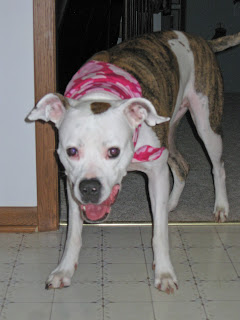 I'm having a lot of fun dressing Holly up.  I discovered lots of cute doggy apparel and accessories at BaxterBoo.com.  They even carry Holly's "big girl" sizes.  Holly's a pretty good sport about wearing everything I buy for her -- even though she won't appreciate the benefits of this ﻿hoodie keeping her ears warm until the colder weather gets here. 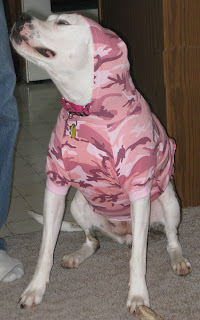 When we have Holly out in public (which we try to do as often as possible), everyone always comments on what a pretty dog she is.  We think she's quite beautiful and have never experienced (knock on wood) any negative comments from people because she's a pitbull.  She's very friendly to people of all ages and sizes and I'm always thrilled when little kids come over to pet her and she gives them a "kiss."  (She's a super kisser!)  Every day is a new opportunity for us to help change people's minds about the negative, "vicious pitbull" stereotype. 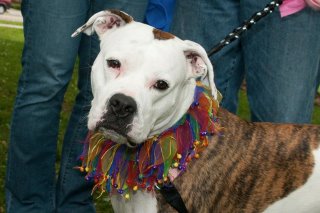 When we adopted Holly, we had to sign a Dog Adoption Contract.  One of the points we had to agree to is as follows, "I agree to provide this animal with.......loving, humane treatments at all times."  I think we've accomplished that and Holly has paid us back ten-fold with joy and happiness every day. 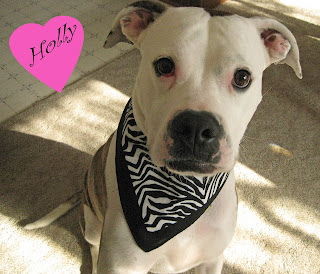 Here's a little video of Holly at her tail-waggin' best.....

Labels: fun stuff, Holly, pets
Newer Posts Older Posts Home
Subscribe to: Posts (Atom)
All images and text are property of RuthieJ and the 'Nature Knitter Blog' and may not be used without permission.