The Misadventures of Holly 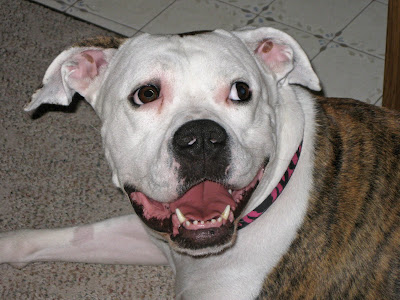 Last Thursday Holly and Mr. Johnson were playing a little game of ball toss while waiting for me to get home from work.  Holly's pretty aggressive when it comes to chasing after her ball and on this particular afternoon, Holly took a really bad spill on the concrete driveway.  Mr. Johnson phoned me in a panic to tell me about this accident and he thought Holly had broken one of her hind legs because she couldn't walk.  I got home and was able to determine that her leg wasn't broken, but it did look like her hip was dislocated.  After a couple phone calls to pet hospitals to find out who could see her, I broke many speed limits racing back in to Rochester with our poor doggeh and her ﻿heartbroken dad in the back seat.

In her fall, Holly suffered a number of other injuries including some serious "road rash" on the inside of her hind leg..... 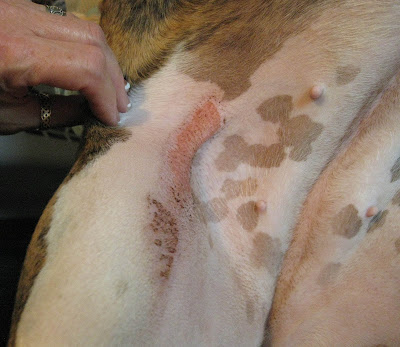 and a really bad abrasion on her elbow that required a couple of staples (ick!) 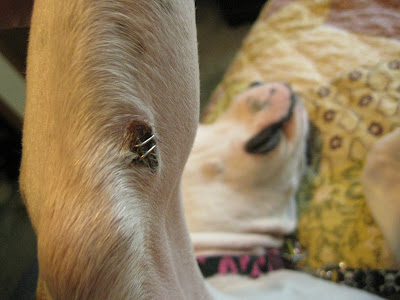 She was in a lot of pain at the pet hospital, so the doctor gave her an IV (the little shaved spot on her front leg is almost grown over again).﻿ 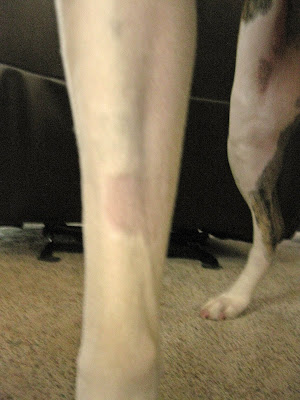 Fortunately, x-rays revealed no broken bones or dislocated hip, but Holly had to stay in the hospital overnight so the vet could monitor her condition.  It turned out that when Holly fell so hard from her fast run, she ruptured a disc in her back.  For anyone who's ever had a ruptured disc, you probably can remember how painful that was and how your doctor probably recommended bed rest for a couple weeks.  Holly's a pretty active girl, but she is trying to follow the doctor's orders as much as possible! 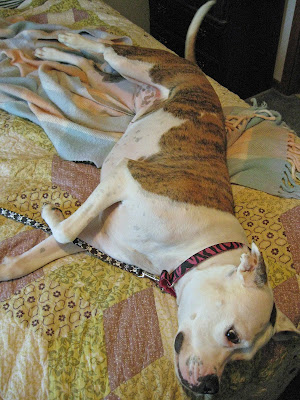 Holly also came home with some presciption meds to help her feel better (no co-pay on pet meds though!)  For 2 weeks she's taking Rimadyl (an NSAID) and Tramadol (for pain).  She loves the Greenies Pill Pockets and so do I. (I wish I had know about these years ago when I was shoving pills down Sophie's throat every day!) 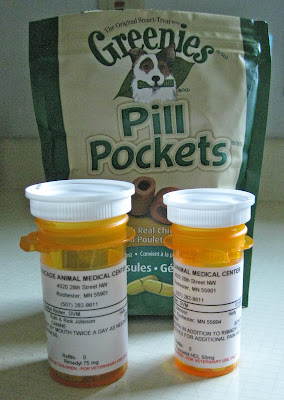 Holly's doing much better now.  Her back legs are getting stronger and she's enjoying all the special attention we're lavishing upon her during her recuperation (including licking off the supper plates).  We're looking forward to her full return to health and regular activities again -- especially those daily walks that we've had to discontinue until her injury has healed.﻿ 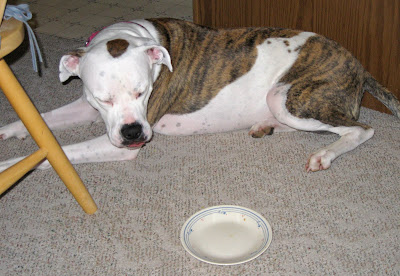 Labels: pets
Newer Posts Older Posts Home
Subscribe to: Posts (Atom)
All images and text are property of RuthieJ and the 'Nature Knitter Blog' and may not be used without permission.