OK, this is another pretty crappy picture (taken through the kitchen window screen), but I was thrilled to finally confirm that the big dove I had spotted when I got home from work this morning was, in fact, the Eurasian Collared Dove! 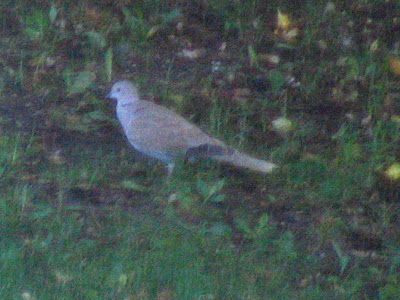 I spotted this really big, light colored dove trying to land near the ground feeder tray late this morning when I was making my sandwich at the kitchen sink, and then a noisy crow flew down and scared the dove away. Later on when I was filling the bird feeders, I saw this dove fly away with a bunch of mourning doves from one of my pine trees (where MODOs like to hang out). I knew right away it wasn't a MODO because of the squared tail with a white band across the bottom. I waited all afternoon and finally around 4:30 I happened to spot it on the ground again and that's when I got this picture. You can just barely see the black "collar" on its neck, but the dark primary wing feathers and squared tail are pretty obvious. Here's how my big Sibley's describes this bird: Much larger and heavier than Mourning Dove, with square tail; pale overall.

I had one of these show up in my backyard in March of 2006. That was a first confirmed sighting in Olmsted County in like forever, and now here's another one. For some of you folks in the southern and eastern US, I think this is probably a fairly common backyard bird, and I've heard their numbers are increasing even here in far southeast Minnesota, but they're still uncommon enough for people (like me) to get excited about.
Posted by RuthieJ at 9/29/2009 05:29:00 PM

Congrats on the new yard bird. They are pretty doves. We have them around town but never in our garden. I can't wait (I think) to have one at our feeders.

Way to go Ruthie! Nice bird for
the yardlist.
Hap in New Hope

Wahooo Ruthie! That would be lifer for me. Way to go!

Nice one Ruthie! New Yard birds are always a treat! Haven't seen one here, yet. Had a junco in the yard this a.m. Vern and I are headed for Duluth this weekend. First getaway for us since May. Mom's surgery went well.

I'd never had one until last month Ruthie, and he was only here one day.

I was able to get a photo of him next to a Mourning Dove and you can really SEE the size difference. They are pretty cool birds!

Minnesota is a long way from the Bahamas!

I had seen one in Mesa, AZ this past June. It was on the north-western edge of its territory on the updated map I had. That was pretty neat. The map also showed it heading up the great plains area and you're just north of that, so that's still exciting.

These doves now have an established population in towns and cities in the SE. Thing about them is that they shoulder out the smaller doves, especially common ground doves, at the feeders. They are indeed beautiful doves, but are an exotic species, with all that implies.

It also appears they can successfully interbreed with other escaped domesticated doves. Not a problem unless they increase in numbers thus crowding out native species. When I came here to SWGA I couldn't identify them, and harbored all sorts of "Rare Bird Found" fantasies. Alas, not so! But, when you see one next, notice that when flying they fan their tails into a wedge shape. This is the dovetail the woodworkers named the little wedge-like joints in the corners of drawers for. Who knew? You got it here--it ain't in Sibley! :)

Thanks Lisa. I think they're pretty doves too, at least it's a change from the usual mourning doves!

Hope you get one in your backyard someday too Richard.

Thanks Lynne. It was a good bird to check off on my Minnesota list for 2009 too!

Hi Cindy,
Good news about your mom's surgery. I hope her recovery is speedy and uneventful.
Have fun in Duluth, hope it's sunny and you see lots of migrants!

Hi Jayne,
I'd forgotten about your sighting, so thanks for the link. I checked out that post again and your photos are waaaaaay better than mine!

Hi Heidi,
When I saw this dove the other day, I called my birding friend John. He's a Minnesota county lister and he didn't get a chance to see it in my yard in 2006 and still waiting to list one for Olmsted County. It's rainy, windy and cold here today, but I hope this dove hangs around until the weather shapes up again so John gets his chance to see the dove!

Hi Nancy,
Thanks for the information--especially about the "dovetail."

Mourning doves and rock pigeons are the most common doves here in Minnesota, so even though they're considered exotic, the Eurasian Collared Dove is still an uncommon sighting for much of Minnesota.

Thanks Kelly & Dawn. Now if I can only get it to stick around so my birding friends who need to check it off their county list get a chance to see it too!

From Pierre, SD -- In 2007 we spotted a pair of Eurasian collared doves in our back yard at our bird feeders. In 2008 a few more were obseved along with our usual pairs of Mourning Doves. This year (Nov 25th 2009)I counted 25 plus Eurasians at one time in my back yard. They appear to be driving the Mourning Doves away. In South Dakota they are considered open shooting along with European starlings, Blackbirds, grackles and crows.