We survived our first major storm of the winter. The winter storm warning was issued early yesterday morning and the snow flurries started coming down around 2:30 in the afternoon. Predictions were that we could possibly get anywhere from 4-10" by the end of today. Fortunately, we ended up on the lower side of the predictions and once it stopped snowing earlier today, we had a total of 5.6" at our house, and that's more than enough for me!

Here's how the backyard is looking--you can just see the top of the metal pheasant's head now (compared to seeing almost his entire body on November 30th). 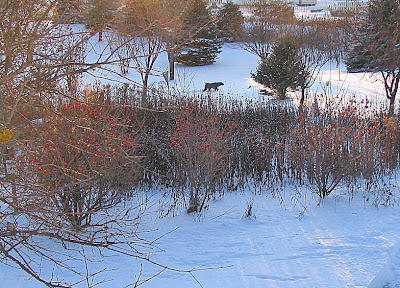 The weatherman had been predicting some pretty high winds after the snow finished, but we were thankful that those predicted 30 mph gusts didn't arrive after all, so most of the snow that fell just stayed where it was instead of blowing and drifting all over the place.

When we got home from work today, Mr Johnson fired up the snowblower and after he finished clearing the driveway, it was my turn to make all my paths to the birdfeeders in the backyard. 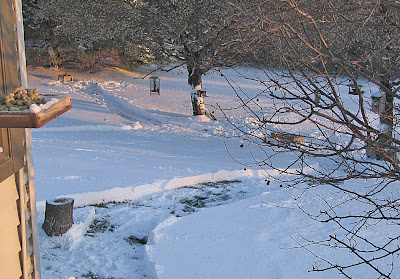 I love playing with the snowblower! I know some of you might think this is a huge waste of gas just cutting all these paths through the backyard, but it makes it so much easier for me to get out and fill all the birdfeeders every day, plus Sophie really likes running on the paths too. These are all her tracks in the picture below--she gets off the path when I throw her frisbee. 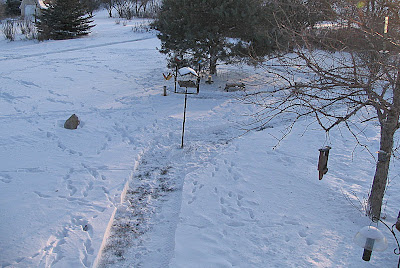 Before I went to bed last night, I checked to see if the deer had stopped to eat some corn and I was surprised to see at least 7 in the backyard. Mr. Johnson just got back from his walk and he talked to one of the neighbors who lives up the street who mentioned that he had seen 17 deer recently eating apples in his backyard. Holy Moly! It will be interesting to see whether the number of deer in our backyard continues to increase as winter progresses. I'll keep my camera handy and post updates as they become available.
Posted by RuthieJ at 12/09/2008 04:50:00 PM

Your yard looks like my yard, paths every where especially to all the bird feeders, isn't that fun to make paths, all my kitties like paths too. They romp all over and run and chase once they are all cleared. Out total was 6 1/2 ins, just enough [for now].

I can't imagine what it is like to live where there is so much snow. If we get one snowfall with five inches we think we've had winter! lol!

There is even a desire to keep from having the snow messed up with footprints while it is on the ground. We like it to look pretty for as long as possible. Of course it is often gone in a day or two.

You look like you got the type of snow that I like which is enough to be pretty but not enough to be irritating.

I wish I had a snow blower. This is my first year of winter feeding and I am dreading having to shovel paths to the bird feeders. I will do it, but I will compain the whole time. ;o)

compain=complain. I so wish blogger would let you go back and edit your comments after you realize you made an error. Sorry

Ruthie - you have a nice big backyard there! The paths are a great idea! This is what I need!
We have had nearly 70 inches of snow this season already in northern Michigan - Gaylord. Normally we get 151 inches for the entire season - and we've already reached half that total early on.

Wow--that's a lot of deer--especially if you are still planning to keep feeding them.

We have had a lot of flurries and even a squall or two, but no major accumulation yet.

We also have paths all over...out to the chicken coop, the wood pile, a path for dog and paths to all the birdfeeders.

Hi Ruthie, just gave you an award. I know you have that one, but I think you deserve it AGAIN :)

I don't blame you for making your paths Ruthie. It is safer getting around your garden this way.

I have a funny web site you can go to to see a dog romping in the snow. I think you would enjoy seeing this. However it might be something you see often. It was amazing and entertaining to me.

Hi Mom,
After I filled the feeders this morning, I think I need to make a couple more shortcut paths. The deer did like following the paths last night--lots of hoofprints this morning.

Hi Dana,
I always marvel at yards where there are no kids or dogs living in the house--their snow always stays perfect too. Pretty soon we'll get some more to cover up all the tracks.

Hi Kallen305,
That snowblower makes filling feeders in winter so much better. I'm sure my neigbors think I'm nuts, but it's so much easier than trudging through drifts!
(Here's what I do if I post my comment before I notice the error: copy your comment, then go back to the "comments" page and re-post it and fix the error, then you can delete the first comment with the typo. But I knew what you meant ;-)

Yikes Shelley, you must be in the UP? It's been years since we've had 70" of snow for the entire season! How do you find places to put it all?

Hi Donna,
Yes, I plan to keep feeding the deer for as long as I can. I picked up another 100 lbs of shelled corn the other night. I'm hoping it will keep them from nibbling all my shrubs at least.

Hi Debbie,
Hopefully you'll have enough snow for a white Christmas. For people like us who live in the country, it's nice to have the snow covering to insulate all those underground water lines and the septic system.
I bet your kids love running around the snow paths too, don't they?

Thank you Mel. I'll stop by in a little bit and pick up the award....and pick out some people I can pass it along to.

Hi Lisa,
Thanks for the link to the dog video. :-) Can you believe how much snow they've got there? Bailey doesn't seem to mind it though.

Hi Jayne,
But the reverse of snow situation is that I'd be incapacitated by upper 90 and 100 degree temps in the summer, like you get down in Georgia! (I'll take snow any time!)

On the edge of Wirth Park in Golden Valley, we are seeing very few deer this year. The fallen crab apples go uneaten and there are no tracks beneath my bird feeders. Glad they are doing well elsewhere! As always, lovely photos, Ruthie. Thanks for the view.

Using the snow blower to make your paths seems like a lickety-split way to go to me. We hand shovel the paths to our feeders but don't have near the extensive set-up that you do and the feeders are all close-in.

I just keep feeders on the deck. My husband makes a path in the yard for the dog when it gets too deep for him. Glad to see you enjoyed some sunshine!

Hi Kathy,
Any thoughts on those missing deer? Habitat loss? A special bowhunt to decrease the herd size? I know there are still quite a few deer in some residential areas of Rochester and some citizens consider them a real nuisance. I'm happy that there are still some around our area--especially with all the nearby commercial construction and Highway 63 so close.

Hi Mama Pea,
I'm sure shoveling these paths would be good exercise for me, but the snowblower is so much quicker--about half an hour and I was all done.
I just heard the KARE-11 weather forecast for early next week and I believe the words they used were, "northern Minnesota could get walloped" when talking about a snow event moving in Sunday. Keep us posted!

Hi Ruth,
I have 4 feeders on my deck too. Do you think I've let this birdfeeding obsession get a little out of control??
;-)

Ruthie, you are not the only snow-blower lover. We used to plow through blizzards several times a day to keep the highways open to the feeders. Chloe and Bella traveled Pee-Pee Place and Poop-Poop Drive. We also kept a long, straight stretch of pathway open for their ball games. Tee-hee!

LOL, Mary! Sophie is not nearly as smart as Chloe and Bella as she still goes off the path to do her business--even when the snow is up to her belly (and butt!)

Sounds like the deer need a little thinning out! I assume deer season is over?

Glad you're not a frozen snowwoman after that storm :)