There was definitely a nip in the air today. Late last night our wind switched around to the north and was blowing pretty strongly already this morning at 4:15 when I went out to fill the birdfeeders before work. No sweatshirt over the jammies today--I had to break out the fleece with wind-blocking liner and zipped it all the way up to my chin!

It turned out to be a beautiful sunny day, but I think our daytime high was only about 64. Our weatherman is predicting a chance of frost for low-lying areas tonight, with a hard frost for northern Minnesota. When I went out to pick the almost-ripe tomatoes (just in case), I had to put on a stocking cap because the breeze was pretty chilly on my ears. 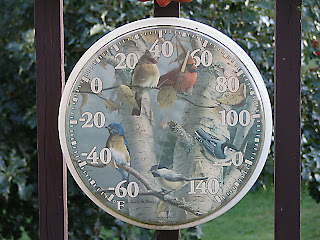 Here's the thermometer on my deck at 7:15 this evening (wish you were here, Mary!)

It's nice to go downstairs and grab a quart of tomatoes from your own garden for that first pot of slow-cooker chili on a cold November day. 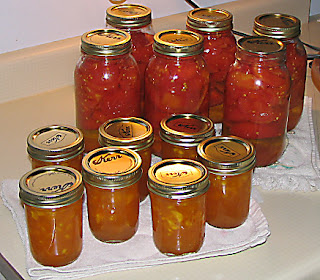 Today my project was peach jam. I got some huge and delicious peaches at the grocery store last week and thought it would be fun to try this since I'm on a "jelly roll." A bit messy peeling and cutting up the peaches, but all in all much easier and quicker than last week's grape jelly.

So for now, I'm caught up on preserving and going back to knitting for the rest of the week.

The hummingbirds are still here, but I don't know for how much longer. My migration guide says they will leave around the last week in September, but a few more chilly, windy days like today and they may want to head out a little sooner. 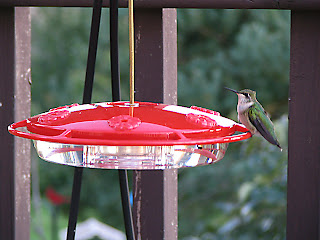 The northerly breeze is ruffling the feathers on her head.

I don't think we broke 60 today and that northerly wind sure does smell good! I'm impressed with your canning. We did peach freezer jam a few years ago and nothing tasted better in midwinter than that peach jam!

It's obviously much cooler there! I'm sitting here with the fan blowing on me at 8PM at night!!
It won't be quite like fall for probably another month, although we did see leaves falling on our walk today.
You are so ambitious on the jelly, jam and tomatoes. They are a much better taste than commercially canned.
:)

I use to can everything when all of you were home, peas, corn, green beans, tomatoes, pickles, apples for sauce and for pies, also beets and peaches and then we got a freezer so then it was freeze everything. When we ran out of freezer space it was back to canning 2 pressure cookers really came in handy they each held 7 qts. Now my fruit cellar is almost empty and we no longer have a garden but those were the days. It was a lot of work but also a lot of fun. Just run to the basement and get what you wanted and to think I grew up in Chicago where no one thought of that kind of stuff.
MOM

Storms rolled through last night from your area and now we have the NW winds and cool air. But no frosts in the forecast for now. Your hummingbirds will be in good shape for migration with the feeding they got from you. I love peach jam, but I made peach chutney this year instead.

Wow Ruthie, you've been busy! But won't it be wonderful to have that in the dead of winter? :c) It all looks delicious. We've had morning temps in the high 60's but the days are still in the high 80's. Come on fall!

I'm not commenting on the peach preserves or tomatoes because I don't want to appear as being a beggar. Chortle!

Hi Lynne,
I was sure ready for some cooler weather--finally got to wear that new sweatshirt I bought back in June!

Hi Susie,
You're still having a heatwave in California aren't you?
I was commenting to the Spousal Unit on whether I really saved by doing all this preserving myself and his response was, "Yeah, but at least you know exactly what's in it!" Too true--nothing artificial here & all "Made in the USA"

Hi Mom,
I remember those summer canning days vividly--those little nozzles on top of the pressure cookers jiggling and spitting out steam--we always stayed out of the way cuz we were scared they'd explode.
And then you'd send me downstairs to get a jar of beets for supper...boy, that was a trudge because I hated beets when I was a little kid.

Hi Ruth,
Did you get some good rains from your stormy weather? Hopefully you will get a little more moisture in the ground before things start freezing up.
I looked up peach chutney in my preserving cookbook. I don't think I've ever had that--tell me what you use it for? Because I was also looking at a recipe for jalapeno jelly, but the peach chutney sounds even better.

Hi Jayne,
Opening a jar of tomatoes in the winter always reminds me of summer and the garden and makes me look forward to next summer.
I'm glad you're finally cooling down too. Any rain yet?

Hi Mary,
I hope things cool down for you soon.
You know....that jelly jar is returnable for refills.... ;-)

Today was our very first "cool" today--it only got to 80 degrees. Still, I had to close the windows a few minutes ago because of the chill. And I noted that our butterflies are disappearing. No coats yet, though.

Hey, I also bought a nifty new weather station that I'll be setting up this weekend. I think I am not a certified (certifiable) weather geek!

Still need to get you that pickle recipe. I am just starting to surface.

We got lots of rain, high winds, trees down and power outages. I like peach chutney with meat dishes or roasted veggies and it is a must with curries. I love it on crackers with Brie cheese, or any other cheese. It has a lot less sugar than jam so I can eat twice a much, Plus apple cider vinegar is supposed to be good for weight loss. (ha!) Mainly I eat it because it tastes good.

Hmm Peach! only kidding! my hummingbirds were still around this morning, even with temps in the lower 40'sF! poor things, I didn't want to bother them at the feeder for the reason of making them even more stressed than they are already!

Hi Robin,
I'm glad things are cooling down for you -- weather-wise and work-wise. I've noticed quite a decrease in butterfly activity also. I think the main monarch migration was last week and I'm only occasionally seeing a few stragglers.

I hope you're planning to post pictures of the new weather station....

Hi Ruth,
Thanks for the information on serving/eating peach chutney. The recipe I have calls for 5 cups of vinegar, but doesn't specify apple cider vinegar, so I marked that in my book.

Hi Tom,
I'm always gone to work before it gets light, but wish I could bring my nectar feeders in at night and put them out when the hummers arrive at daybreak. It would be so much nicer for them to have warm nectar first thing in the morning.

OOO... Peach jam... That sounds yummy... I better stop at the farm stand on my way home tomorrow!

You know, canned tomatoes sure look a lot nicer than frozen ones. Oh well... maybe next year I'll can them!

I definitely want to get in to this type of stuff a little more.-Right now. all I preserve is hot peepers in vinegar with carrot sticks.-I should be able to do better than that.

Hi Jennifer,
This peach jelly turned out yummy. Next time, I will leave out another cup of sugar because the peaches were plenty sweet by themselves.
Tomatoes were the first thing I ever canned years ago. It's nice because you can just 'hot water process' them--no pressure cooker needed.

Hi Larry,
I started by buying the "Ball Blue Book Guide to Home Canning, Freezing & Dehydration." Tomatoes are the easiest to start with, but kinda messy. This is the first time I've ever attempted jelly. If you know your way around the kitchen, you shouldn't have any trouble trying any of these things.
Good luck & be sure to post your results!