My friend (and bow-hunting mentor) Michele sent an e-mail note yesterday afternoon with pictures of her new chicks. I wrote back and asked Michele if she would let me include these pictures and story as a post in my blog and she agreed. In fact, she sent me even more pictures!

Are they not the cutest little fluffballs? 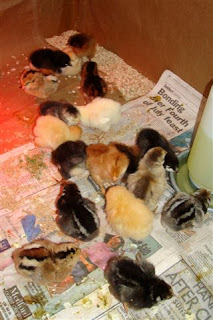 I'm amazed at all the different colors! Here are species she received: Silver Laced Wyandottes, Buff Orpingtons, White Rocks, Rhode Island Reds, Black Australorps, Speckled Sussex, Delaware, Columbian Wyandotte's, Partridge Rocks, Barred Rocks, and Araucanas.
I thought these baby chick pictures were cute, but as I continued to scroll down through the pictures, the story got really interesting..... Michele had also included some photos of the chicks and her cat, BOY. 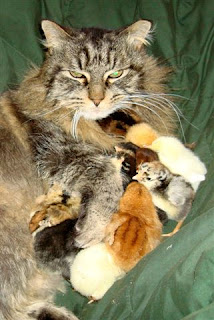 Who needs a heatlamp when you've got a kitty to snuggle with?
Here's what Michele says about these: "Just a few more pictures of my cat BOY and the baby chicks. A good kitty as long as I'm there." 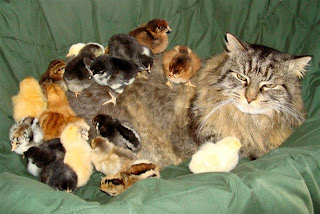 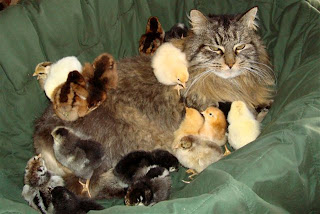 Talk about Cute Overload. Have you ever seen anything like this in your entire life?

And this is not the first time BOY has been a chick foster mom.....here are some other pictures Michele took in 2005. 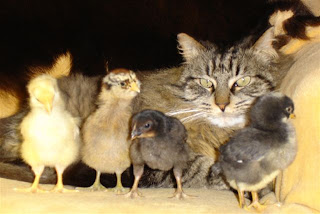 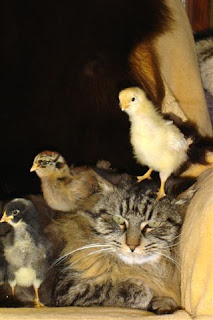 And the really amazing thing is that it's a lifelong friendship. Here's BOY with Zha-Zha (one of the 2005 chicks all grown up into a pretty little hen). 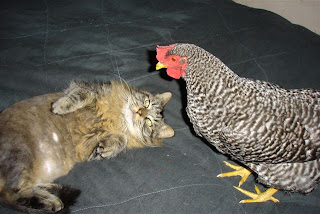 I would dearly love to get some chickens for our place here. Michele's advice is to get 4-6 hens but no roosters (because they will drive the neighbors crazy). I'm not too worried about my neighbors, but a rooster might drive my dog Sophie crazy. Her chickens are free range and she says they eat tons of bugs in her yard. Now I just have to convince Mr. Johnson about how nice it would be to have some chickens of our own!

Thanks Michele for sharing allowing me share your story and pictures in my blog.

Cool pictures!!! That BOY is cute!

Now that is both amazing AND adorable. Good, good kitty!

Dang- those are cute peeps! I'm not sure Boy looks all that happy under the pile of chicks. I think it would be a blast to have chickens. New Hope won't allow it. :(

Oh, my goodness. How totally adorable. Of course, cats being cats, I wouldn't trust him very far. The circle of life and all. But it's still pretty amazing.

I just called my husband in to see if our cat, Miss P, would do that with the new baby chickens I want. He laughed and laughed and says the cat must certainly be drugged.

Still, its cute though. I can hardly wait to see the dog and cat reaction to chickens.

Chicks and cats, well we got the cats, no chicks. To keep peace that's the way it will stay, but it is tempting. Very interesting profile of a cat.
Mom

How cute are those chicks? Then I go down and find the cat with the chicks! I must do it!! "Awww"!

Oh, my God! Cute overload material, Ruthie. I've never seen such cute pictures - all of them - especially the one of the chick standing on the cat's head.

What a great cat.

I could NEVER have chickens for the same reason. The dogs.

Thank you, Michele, for the smile tonight! You have sweet chickies.

If you talk Mr Johnson into agreeing to get chickens be sure and post your reasoning. I have tried for years to get my DB to let me have chickens. NO is always the answer. These chicks are adorable. Boy is a wonder.

When I had chickens I thought they were really cute. They didn't need much care in the summer but in the winter months they need to have a heated water container, of course. They also need to be protected against predators. I agree with Michele, a rooster adds a whole different flavor to the mix. Of course without one, you aren't going to get any fertile eggs.

PS: That is one tolerant feline!

Hi everyone, this is Michele, Boy, and Baby chicks here! Tolerant BOY was, but not willing. (hee-hee) He really just wanted to get away from their high pitched peeps, but I made him stay for the pictures. Poor Poor Boy! I figure it builds his character! I have had Boy since 2000 and I got him when he was 6 years old. He knows if he would have tried to touch them that I would have spanked him. My animals are so well behaved because I trained them and I discipline when needed. Just like kids but they do not mouth off, most of the time! Hee-Hee
Having chickens really isn't hard work, and because mine are free range and can come and go as they wish, the hen house and their roosting area doesn't need to be cleaned that much, because most of their time is spent out side. Summer, they don't eat much grain or laying mash, and in the winter they will. And as said above you just need to have a heated plate for the metal water tank to sit on. (Not a big deal at all) My old rooster RUDY died about a month and a half ago, he was a mean rooster, but I cried when he died, because I truly liked him. He was just very protective of his hens! (He and I argued about the fact that the hens were mine first, not his. HA-HA and I'd have to carry a rake with me when I went to feed my Miniature horse, my goat and the chickens,because he would always try and attack or chase me. (HAAA my husband would laugh his butt off and yell get Mama Rudy Get Mama....so yes, I miss Rudy!)I'm telling you, they ae great intertainment! I was grateful that he was mean because he took great care of the girls. We have 10 acres, but the chickens mormally stay in my yard and up by the barn. Speaking of chickens, I just looked out side and ther is AVA, my 2005 Aracanu (sp) having a snack under my wild bird feeders. I love my chickens.
I have been lucky that Hawk's, Eagle's,Fox and Coyotes haven't taken any of my older hens. BUT, I have 2 big dog's one 93 lbs. (Malmute/German shepherd mix)and the other 70bls.(Border Collie/Collie mix) that are outside during the day and in at night, so I think that is why the fox and coyotes don't come real close to our house.
I have rattled enough... Anyone wanting any more information, tell Ruth you want my email address and email me. Take Care and I'm so glad you all loved the photo's. I love photography, so I am always trying to get different pictures. Michele

Hey, I have never posted a comment before, and I tried to put my name and it didn't work, so I will try again. Michele

Hi Ruthie - that is definitely amazing. I cannot think of even trying something like that with our cats, much less the dogs. Wow! Great photos, too.

BTW, I just tagged you for a six-word memoir meme. It will take a little thinking, but it may be fun to try it. I won't be offended if you don't do it.

I'm glad you all enjoyed the stories and pictures of Michele's kitty and baby chicks. I'm happy she commented and shared more of the story in her own words. I wish you could all meet Michele in person -- she's one in a million! I met Michele several years ago at a Women In The Outdoors seminar and we soon discovered we were kindred spirits (except that she's much younger, much prettier, has way more energy than I do, and oh yeah, she's a pretty famous female bowhunter too). I'll be seeing her this weekend and hopefully I'll get a chance to have a picture taken with her to share on my blog.

This is amazing and I thought our cat was mellow!

Awww! Now that's just too cute for words. I wish I could get Hannah-kitty to do that, but I'm afraid the peeps wouldn't last a moment... My dog, on the other hand, would be frightened of them. Go figure.

I would LOVE to have chickens....but the Cooper's hawks would too.
: (

me ann my camera said...

These are absolutely wonderful pictures!!! What class that cat has!